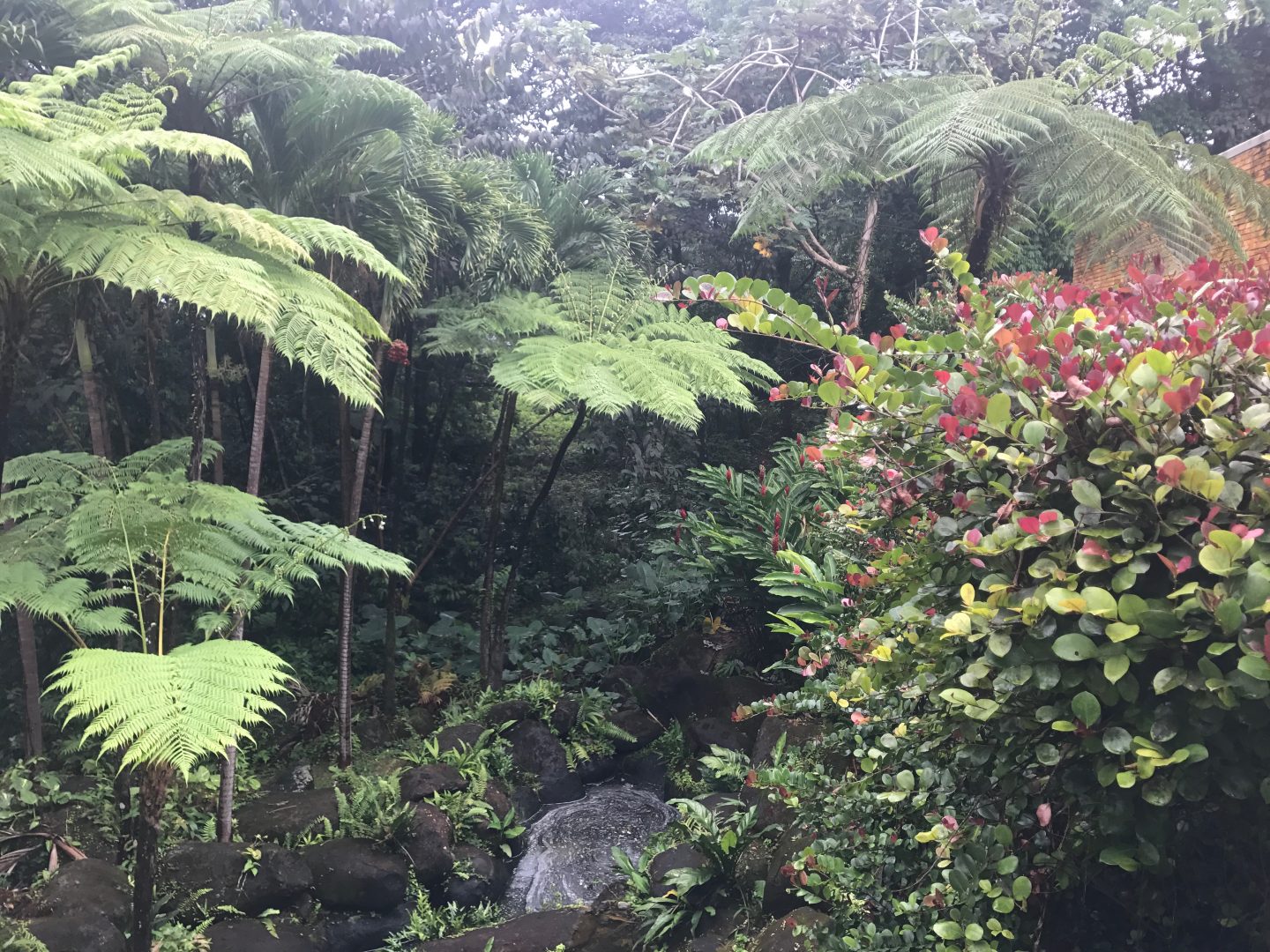 Most recently in March I went to Puerto Rico and explored a fair amount of the island in a week. I wanted to share one of the day trips that we did while we were there. Puerto Rico has sooo many cool places on the mainland as well as several smaller islands nearby so finding a day trip won’t be hard, choosing will be the most difficult. One of the first day trips we did was to El Yunque Forest. It is the only tropical rain forest that we have in the United States, so I thought it would be worth it to check out. 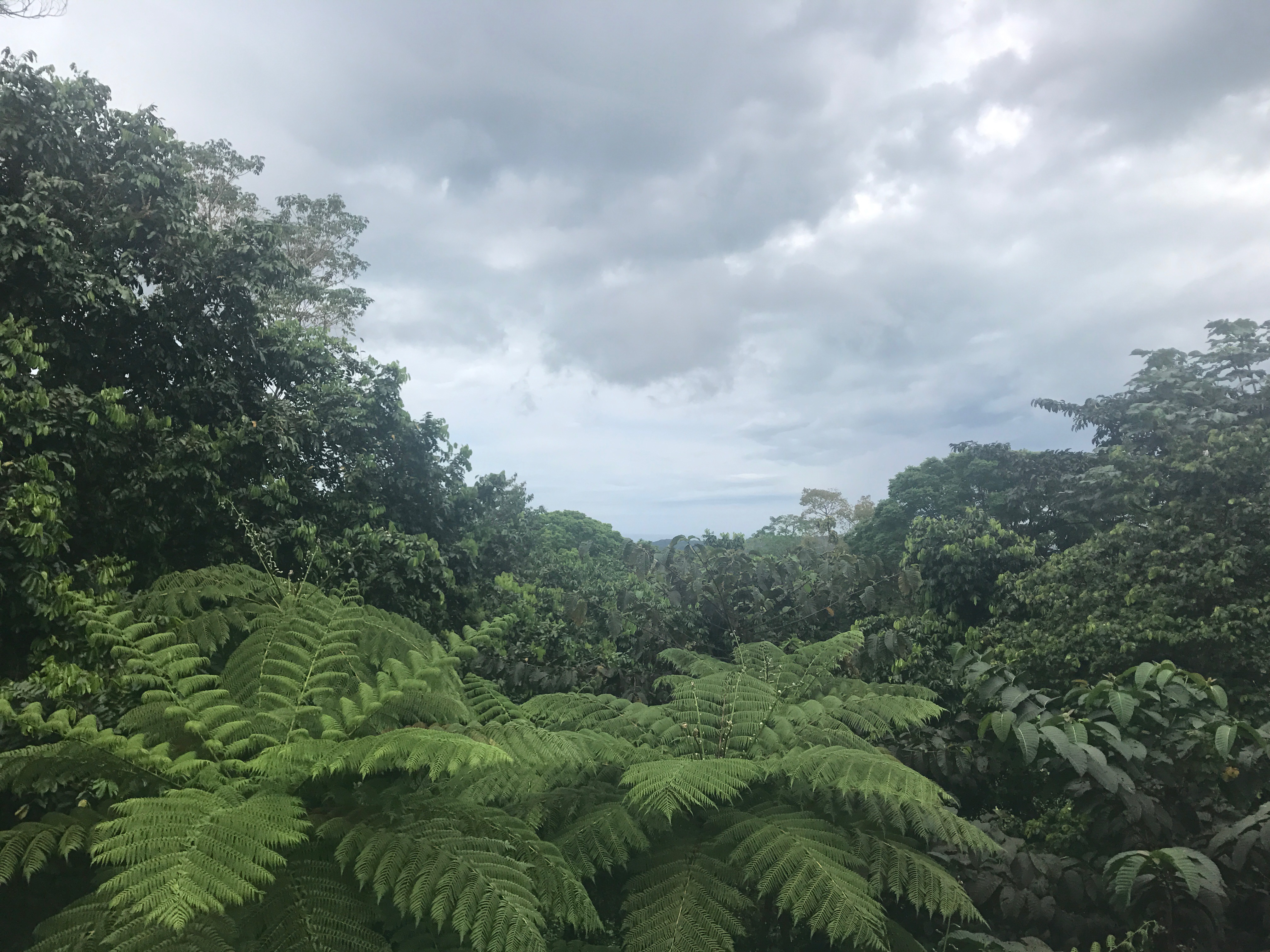 Definitely high on the priority list would be the El Yunque Forest. It’s located about an hour from San Juan by car and there are a lot of transportation options to get there. We chose to rent a car because we knew that we would be driving around the island more than once so it would probably be cheaper to rent a car than to taxi it around each time. El Yunque is the only tropical rain forest a part of the United States, so while in Puerto Rico definitely go and check it out. It is very well maintained with plenty of signs and location indicators along with decent roads and trails. 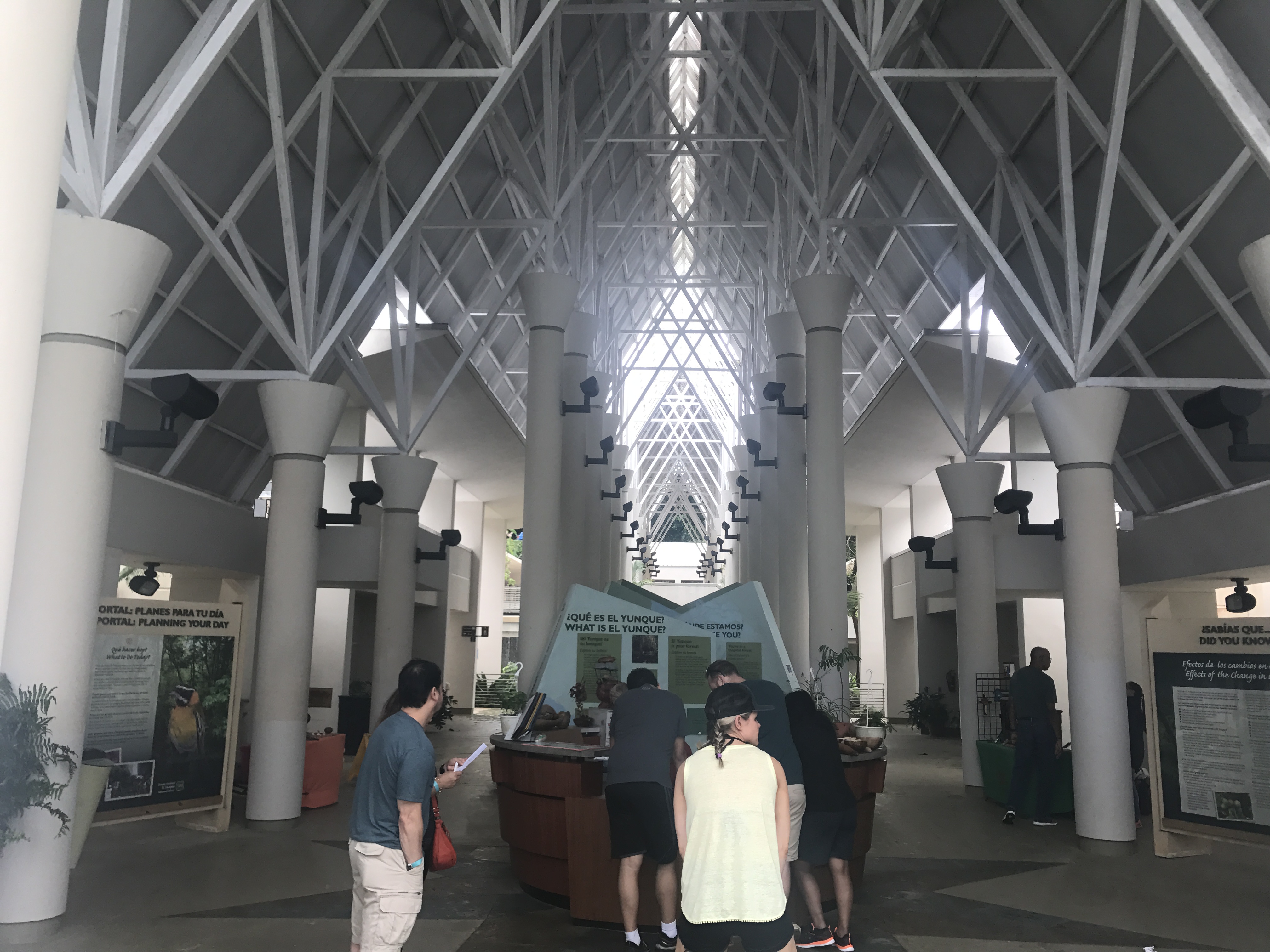 The photo above is the Welcome Center at the entrance of the forest. The workers at the Welcome Center are very informative and can give you updates on trail and road conditions (the rain forest rains EVERYDAY), also stop by to grab a handy map (below) of the area.

The map above does a great job of showing you the hot-spots in the forest that’s easily accessible by road. If you want to go off-trail and have a little more adventure then check out some blogs online as well as some of the tour groups in Puerto Rico. *I know some have night tours in the forest, if you’re interested in trying something like that. In addition,  they have additional tour packages that ‘go off the beaten path’ if that is your thing. Travel Tip: The rain forest is a big tourist spot so plan on going early if you want to be able to avoid the crowds and see all of the spots. 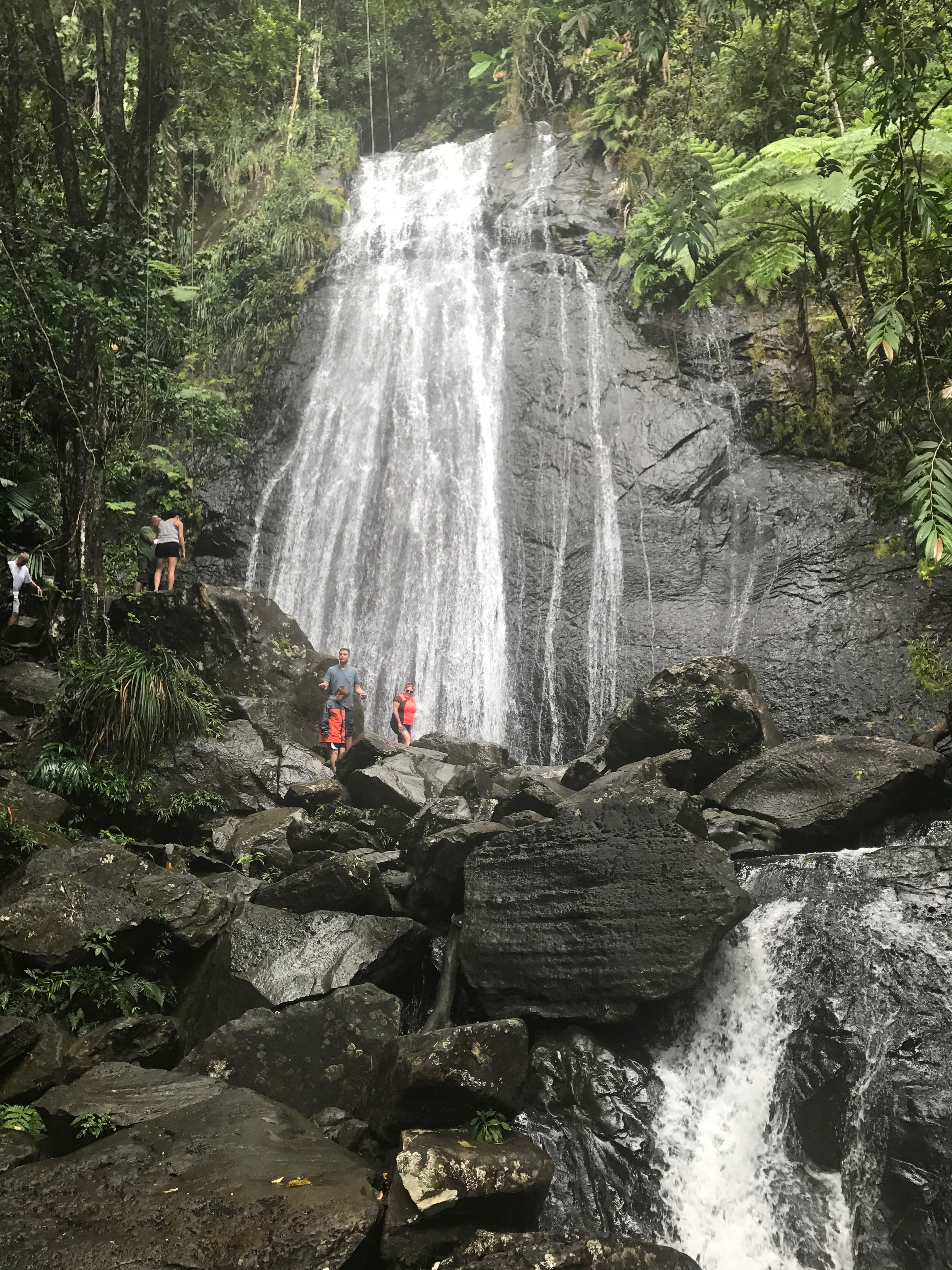 There are several waterfalls at El Yunque, the two popular being La Coca Falls and La Mina Falls. If you do choose to go off the beaten path then search how to access the Juan Diego Falls . The La Coca Falls (pictured above) is the bigger of the two popular falls, but La Mina is the only one that you can swim in. La Coca is best accessed by car (there are a few parking spots near the waterfall) and you can get closer to its base by going up some rocks (be careful, it can be very slippery!). We decided to sit on the rocks and enjoy the fresh water and air of the waterfall, because it’s more than just capturing the photo, its about enjoying the moment! 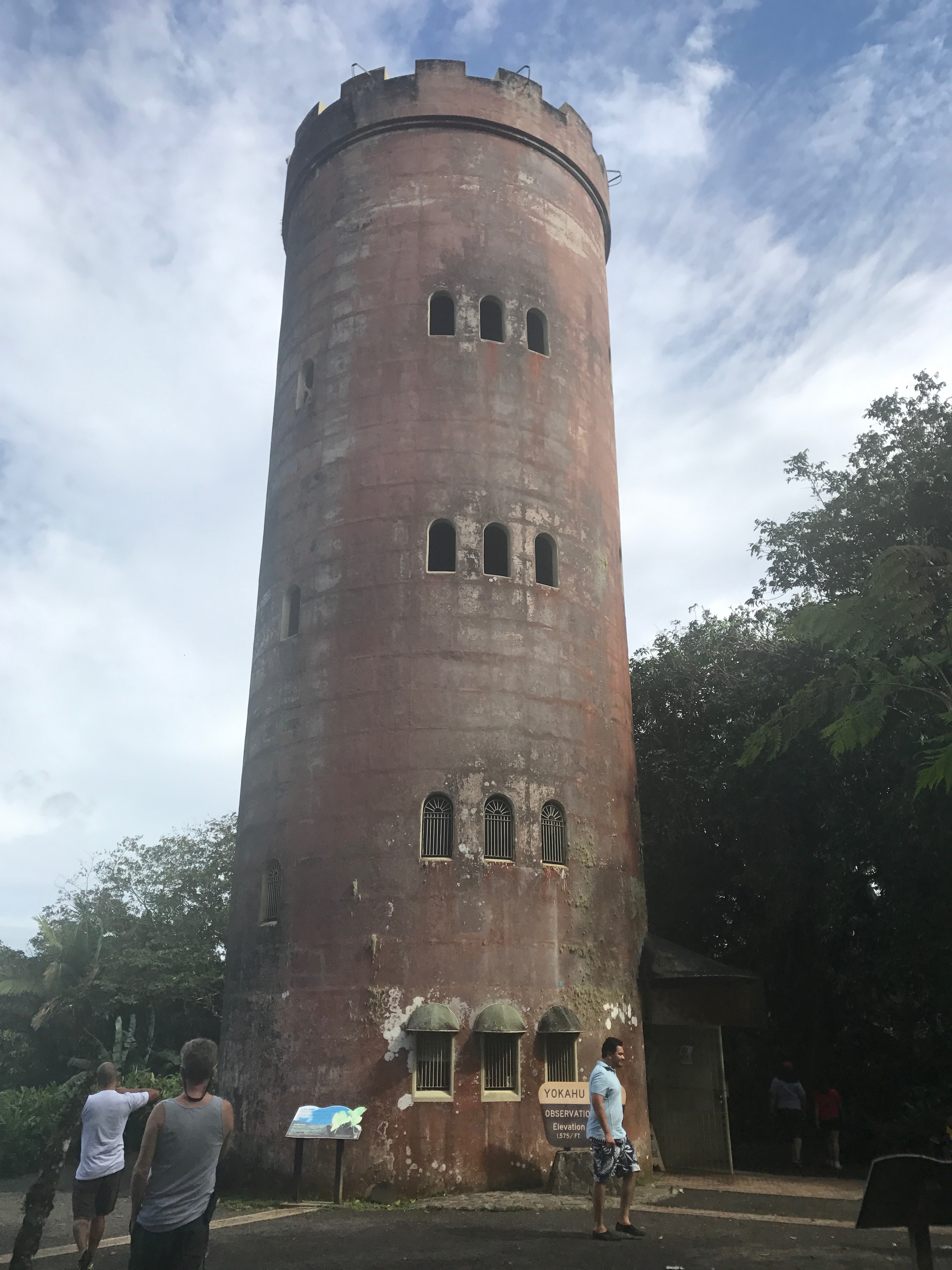 If you follow the road map (pictured above) then the next stop after La Coca Falls is the Yokahu Tower. It is an observation point with 98 steps (from base to top) with an opening at the very top. If you are afraid of heights (like myself) then you may not be able to look out when you get to the top (I definitely couldn’t look out), but fortunately there are a few windows as you ascend up the stairs that you can peak out. 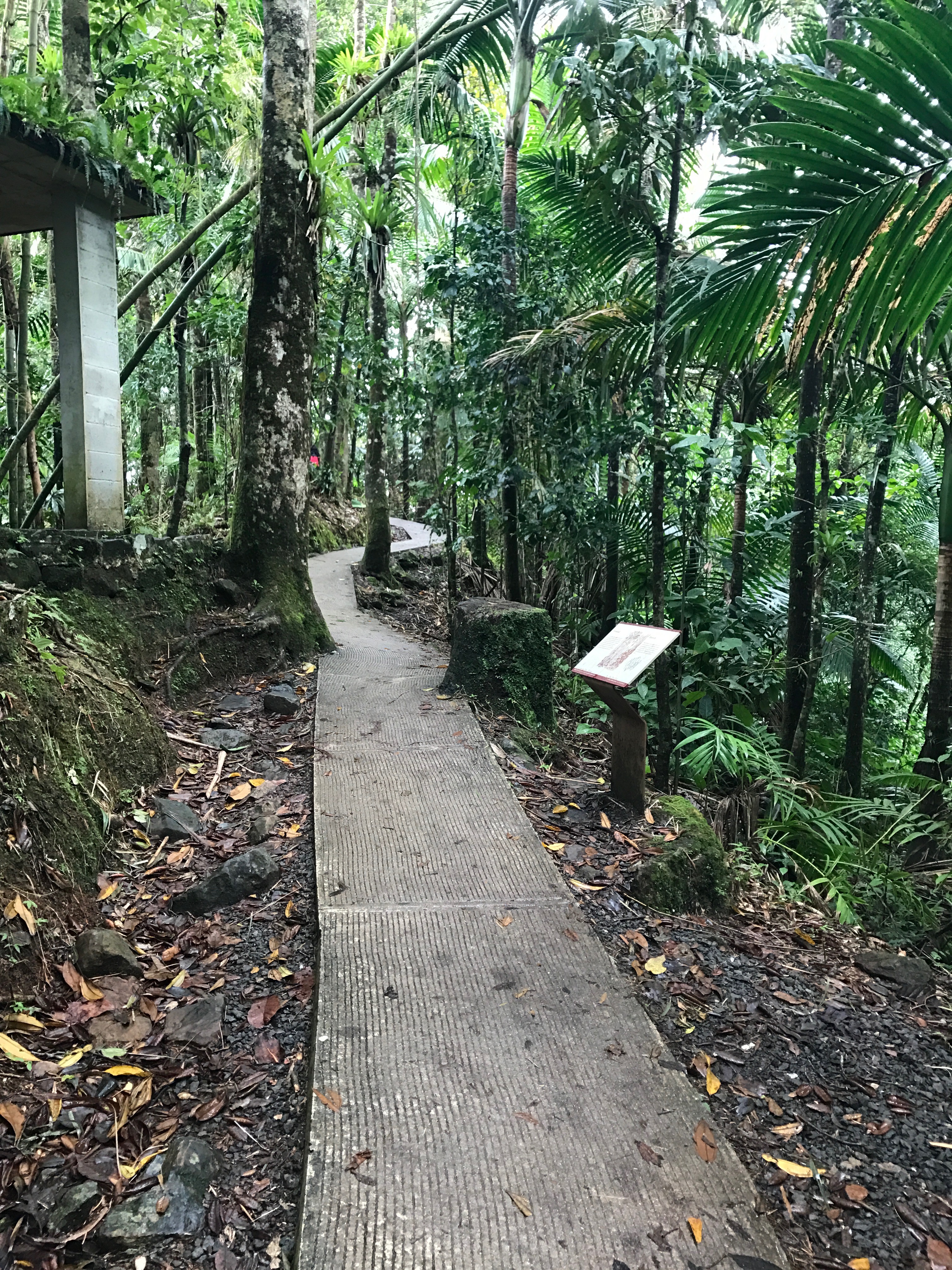 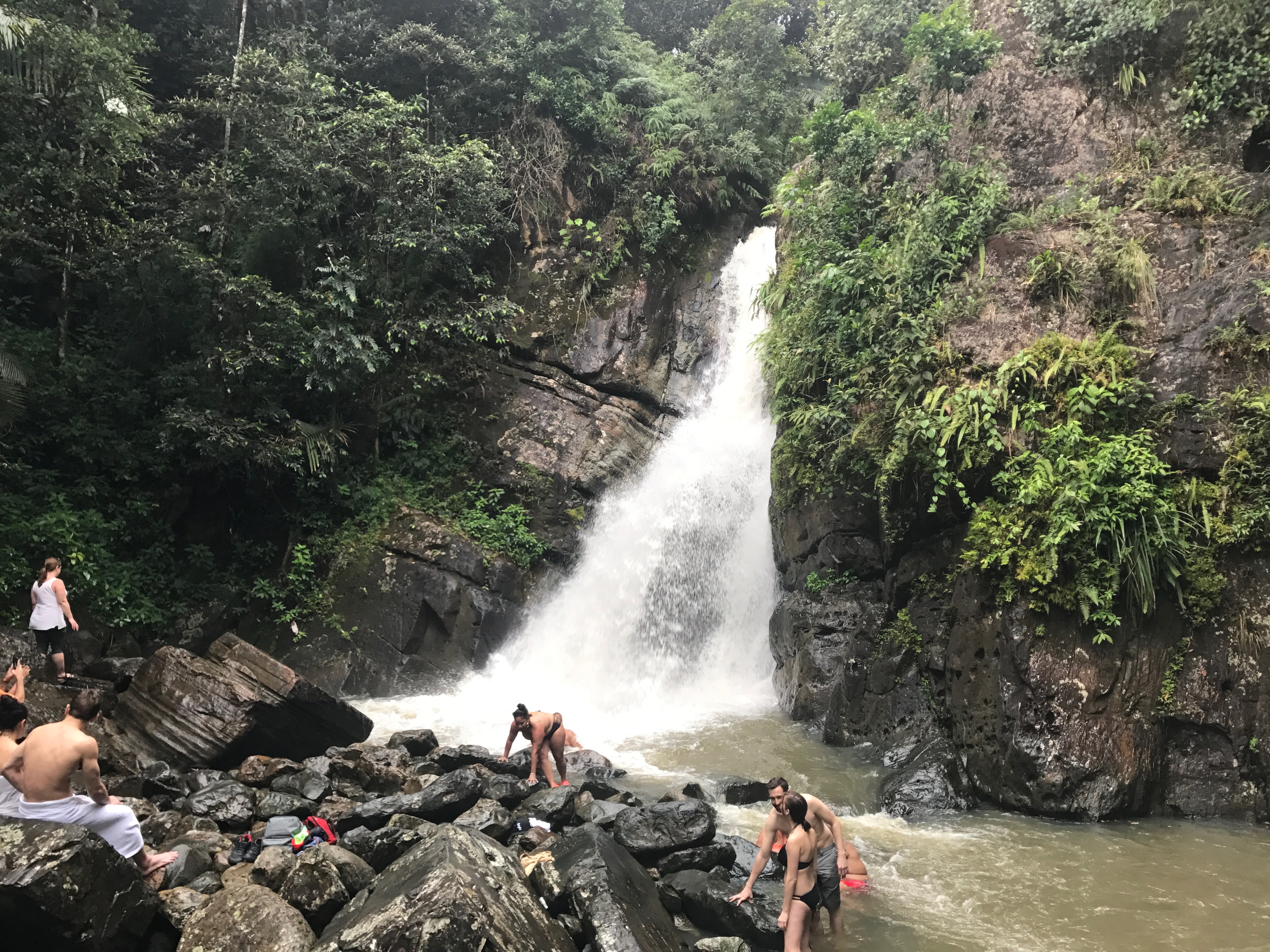 Remember to bring your bathing suit for this portion of El Yunque, there is a small area at the base of the waterfall where people can go swimming (as pictured above). Just to note, the water that flows through El Yunque is not warm like the surrounding ocean water. The average temperature of the water at the waterfalls is about 60F degrees, and since the rainforest is almost completely shaded by trees there is little sun. Everyone who did go for dip did mention that it was freezing yet refreshing! 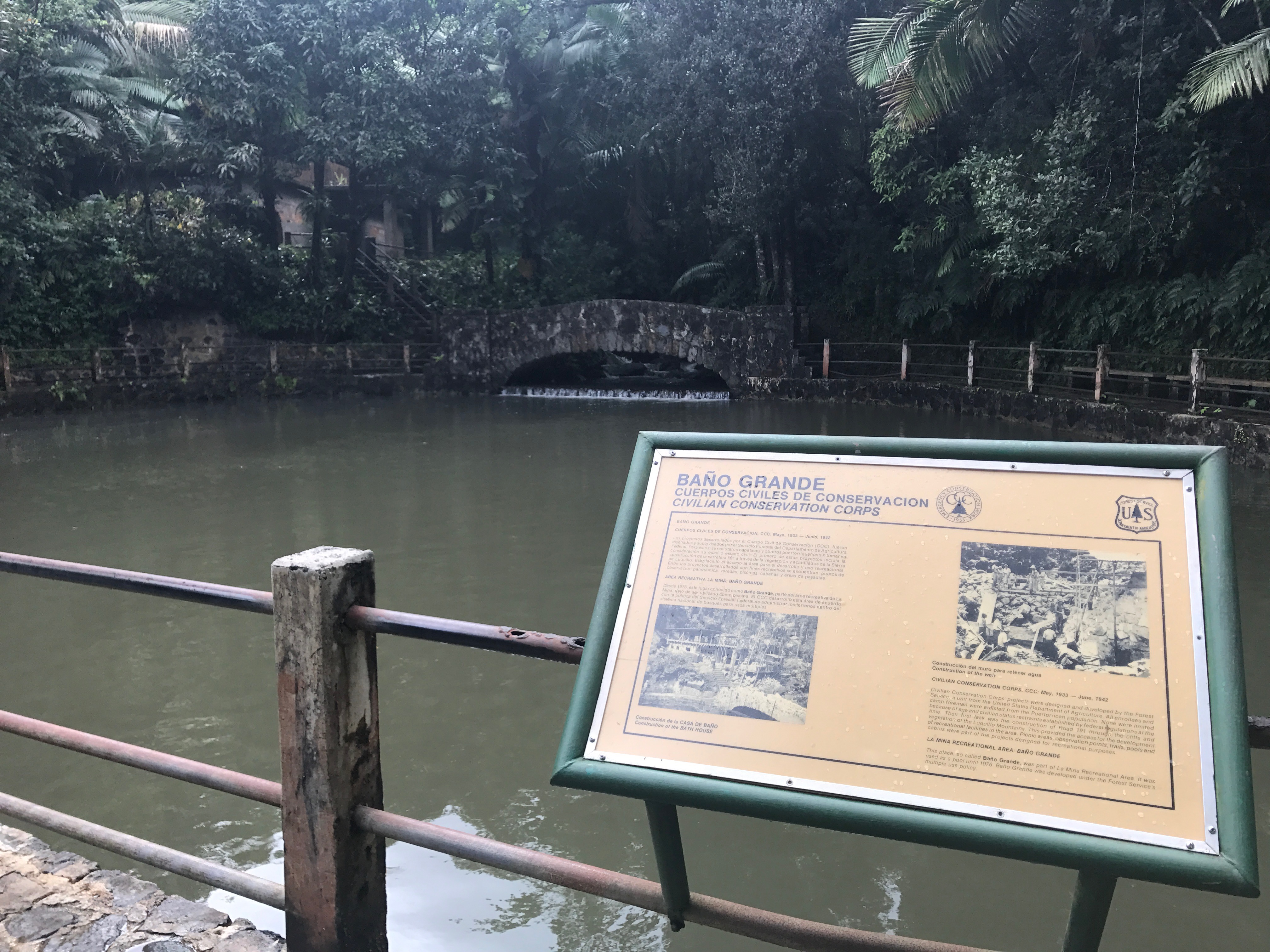 There isn’t much else to see after La Mina Falls and probably will notice that the crowd significantly dissipates. We saw a small trail area that led to Bano Grande (pictured above) which didn’t have much there, but the inset had a good little explanation of what that area was used for in the past. Most of the area was used for recreational activities during construction of the roads, etc at El Yunque, and they still have the structure of the large bathroom on the other side of the pond in the picture (no longer in use). If you choose to keep driving up the road you will eventually come to a locked gate. However, if you want to go to the peak of the mountain you can park your car near the gate and take the trail on foot to the peak. 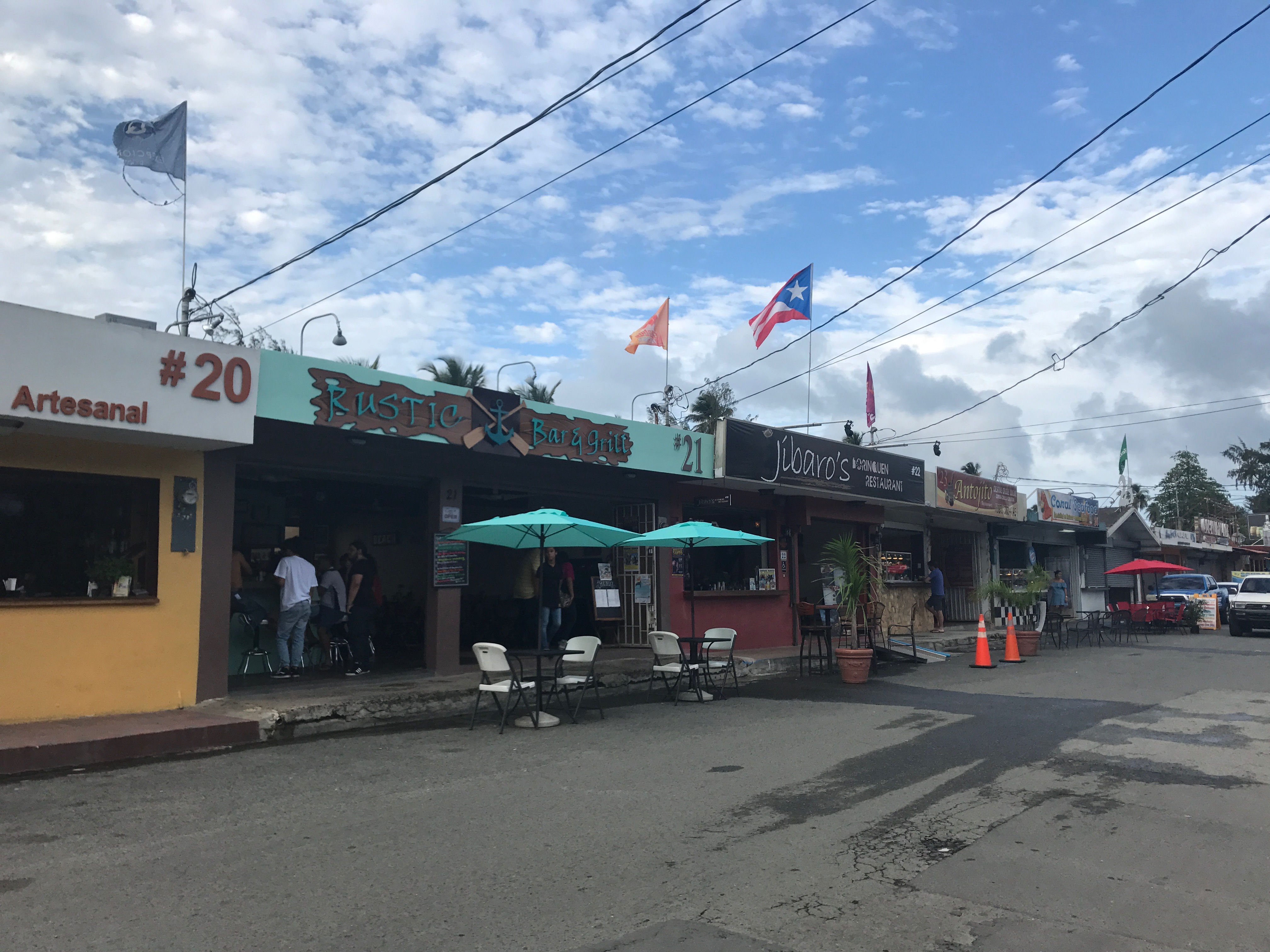 After spending a few hours hiking through and exploring El Yunque, I would recommend stopping by Luquillo Kiosks and Beach. It’s about 20 min. from El Yunque and they have a huge area (pictured above) with a bunch of food kiosks available. They have a variety of food including Puerto Rican cuisine, Caribbean inspired foods, as well as North, Central, and South American influenced dishes. 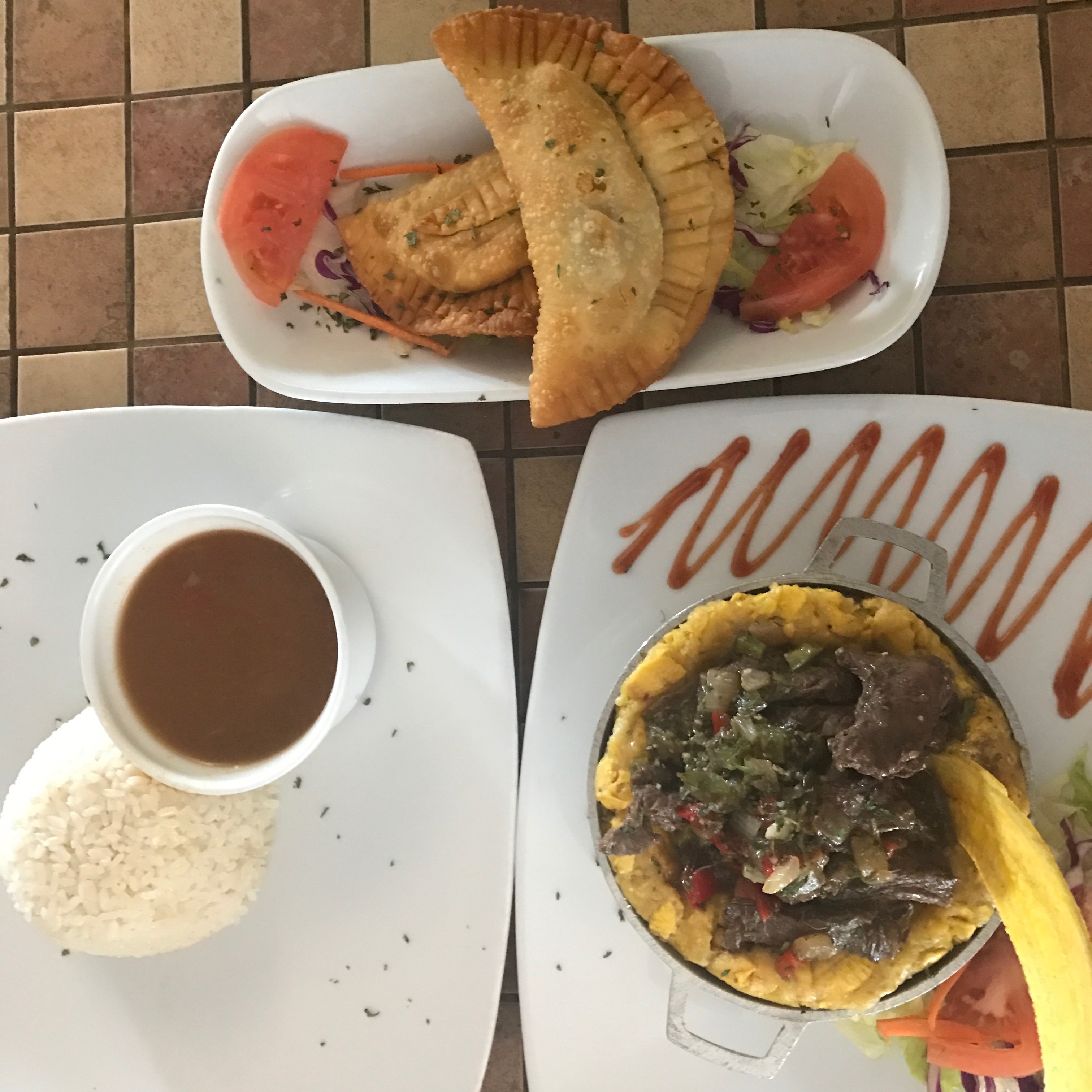 I heard a lot about Mofongo and that it was a Puerto Rico must try dish. I decided to order it at the Luquillo Kiosks since it seemed like it would have some of the most authentic cooks and local tastes. Almost every restaurant in Puerto Rico offers Mofongo as a dish option so it shouldn’t be too difficult to find. Another one of my favorites that was in abundance in Puerto Rico was empanadas. They had a mix from seafood, beef, pork, chicken, and vegetarian empanadas. 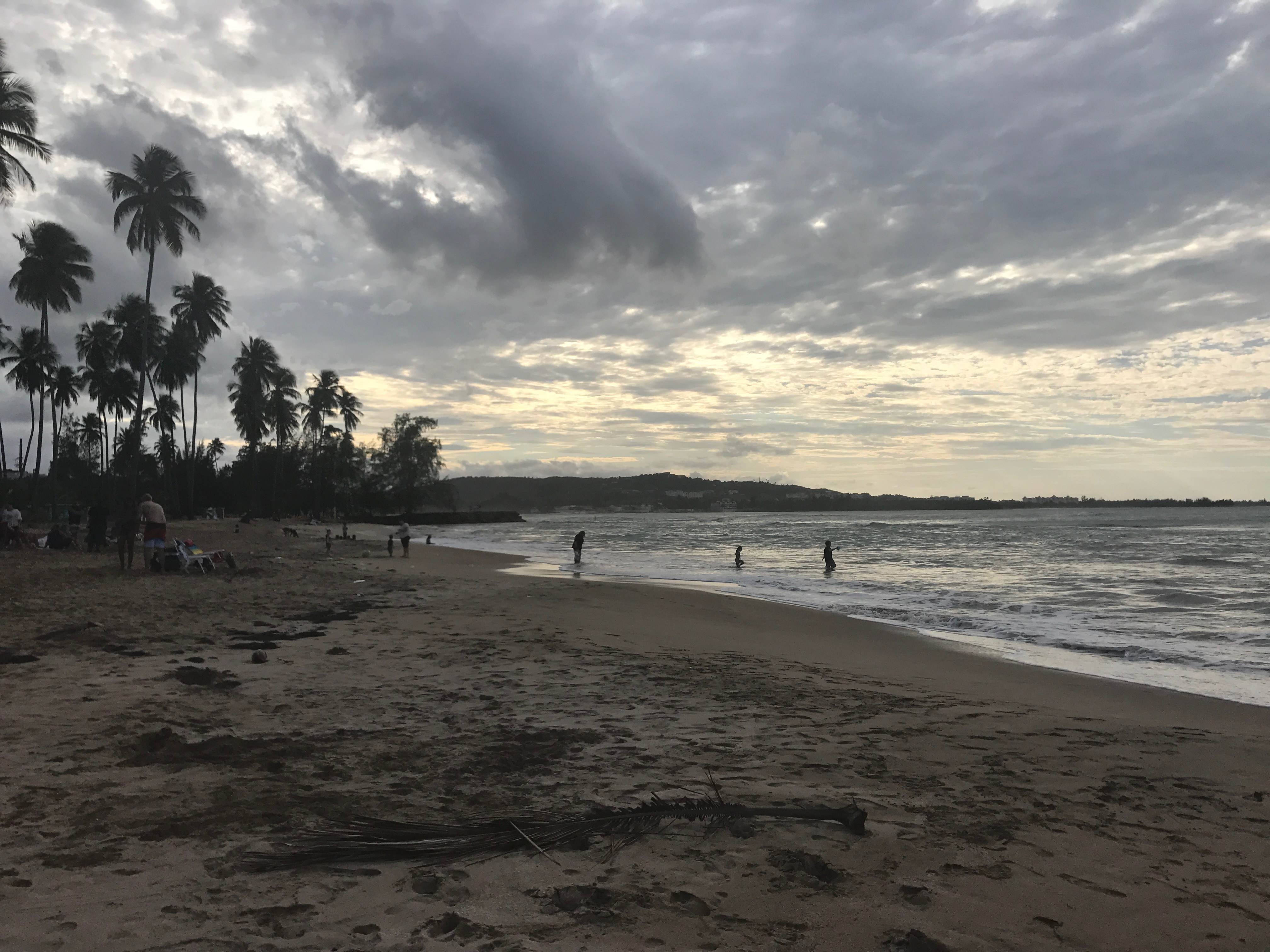 After spending the entire day at the rain forest you’re going to be exhausted! So head over to Luquillo Beach after grabbing some food and get some lounge time at the beach. The water is extremely warm and the weather is consistently warm so even if you get there a little late in the day, it should be fairly uncrowded. It was a great little pit stop after our adventurous day. Fortunately being that Puerto Rico is a decent sized, yet small island, there are plenty of opportunities to pull-off and stop at a nearby beach. 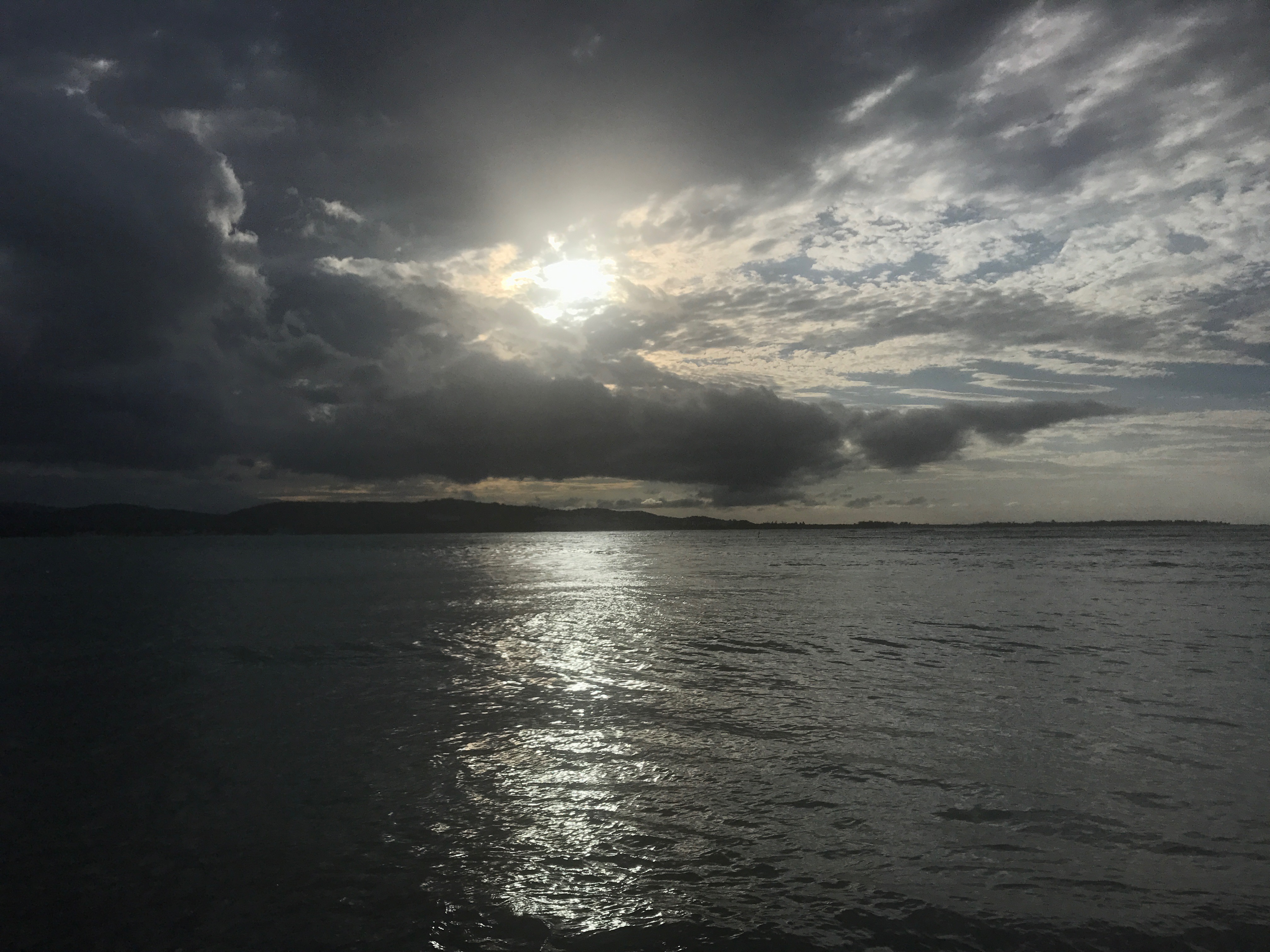