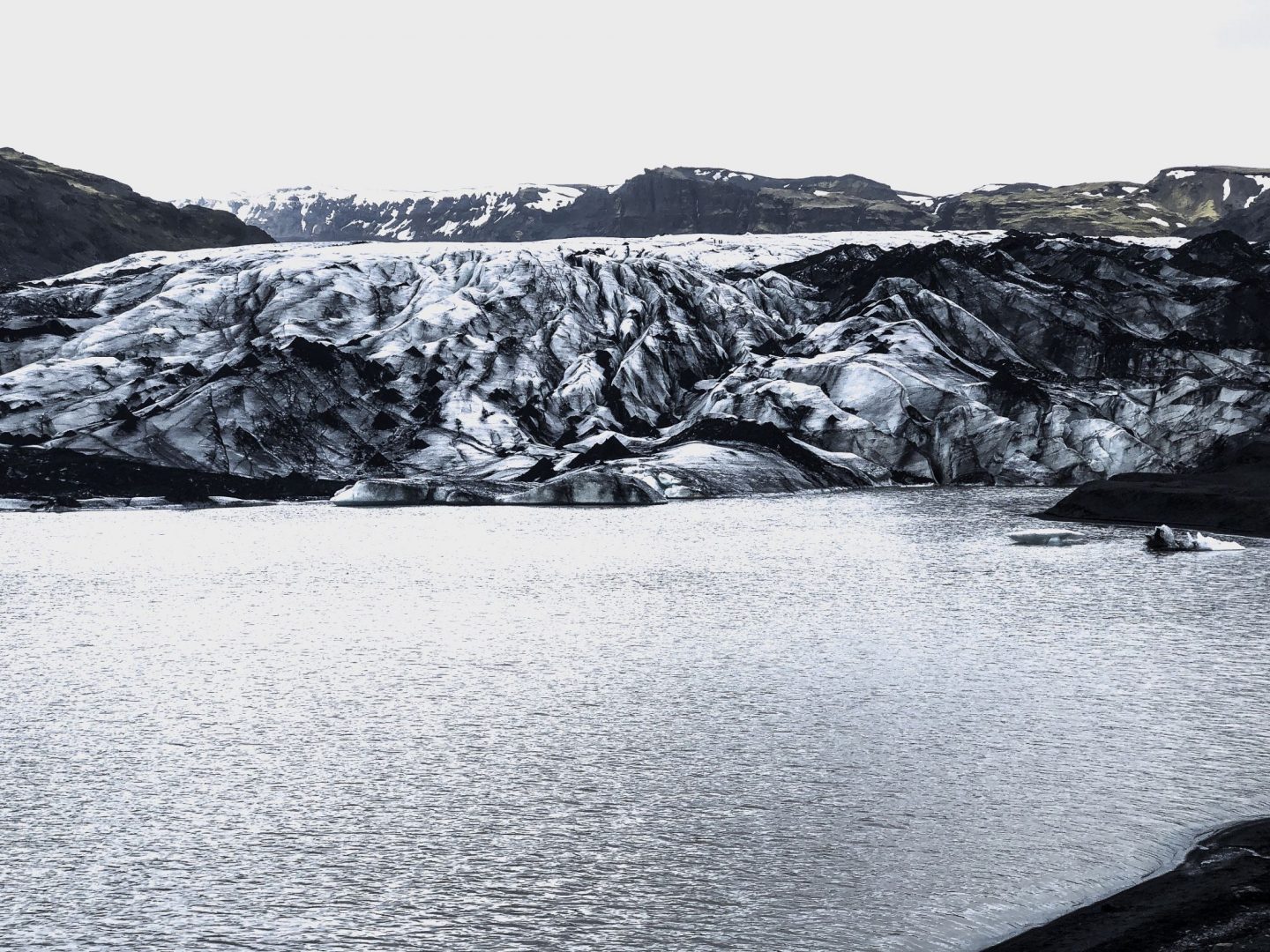 Hope you’re all doing GREAT! I’m still living in a total high from my trip to London, Scotland, and Iceland. If you haven’t yet, check out my London Travel Guide HERE and my London Fashion Guide HERE!

Following my trip in London, we decided to go to Iceland. A couple of things, Iceland’s economy is almost fully dependent on tourism so there are a couple of inexpensive ways to get to Iceland on your next Euro Trip. However, just like everything is bigger in Texas…well, everything is pricier in Iceland! My flight from London to Iceland was $50 which was on the expensive side of ticket options. They had tickets for as low as $25 if I was more flexible on my days and times! I’m pretty sure I just spent $22 on my lunch in San Francisco this afternoon, for perspective purposes!

Before continuing this blog post I think I should let you all know that I was not one to ever imagine that I would be going to Iceland. Trust me, it’s one of the last places I ever expected to see myself! I had a couple of friends and co-workers tell me about their experience and decided that I just needed to check it out for myself, especially given how easy it is to extend your layover. 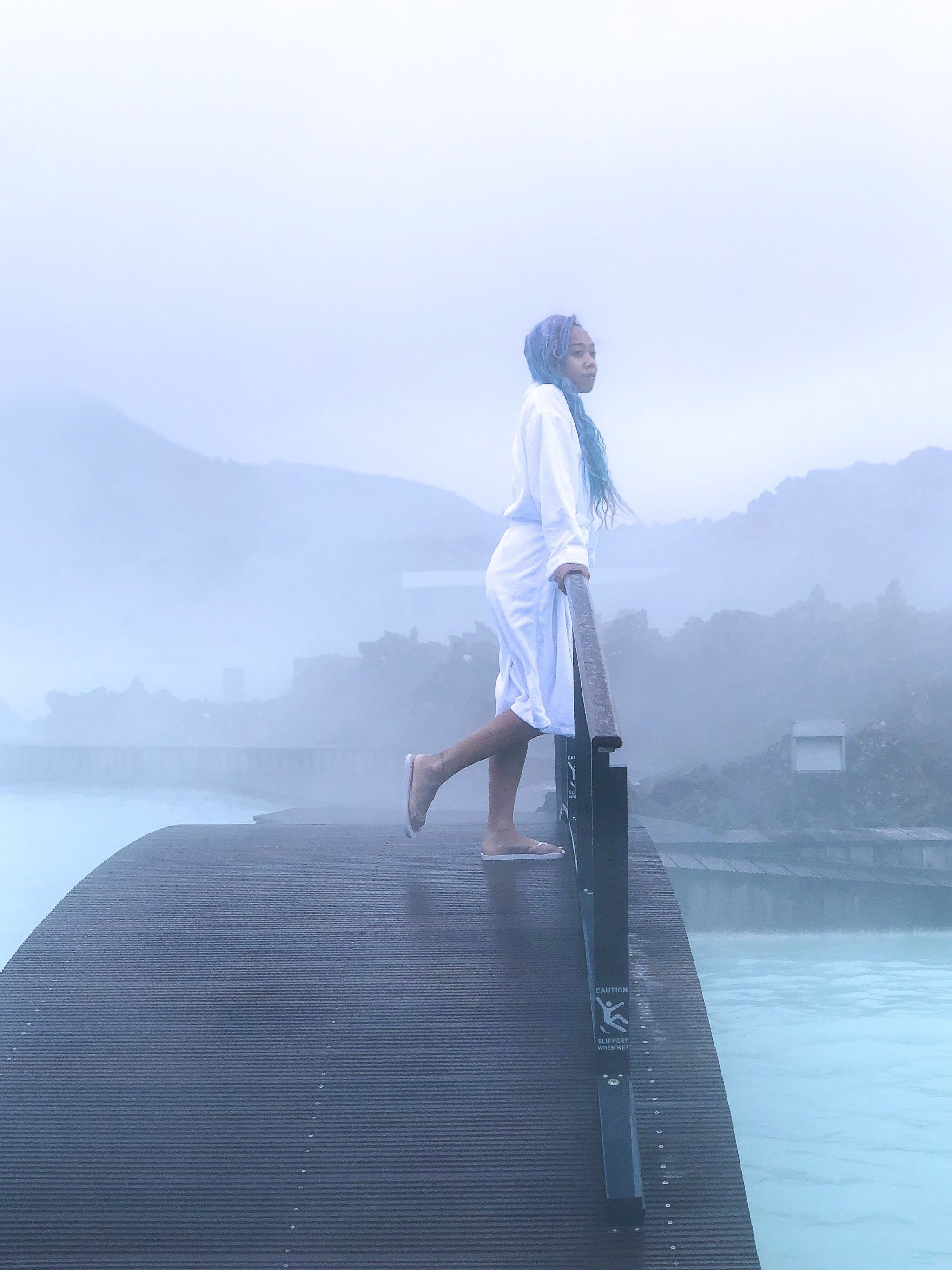 One of the big concerns people have is whether they should drive themselves or pay for the marked up prices of hopping on a tour bus each time. This is a great question and I’m not sure what the best answer is. I broke it up a little below

Opt For Tour Buses If…

you’re going to be in Iceland during their winter (especially if you’re not used to driving in the snow).

Opt For a Car If…

you have experience driving in abnormal weather conditions. Iceland is known to have varying weather conditions depending on where you are on the island. For example, while we did our south coast tour we experienced rain, hail, snow, icy roads, as well as lots of sunshine.

you want to do the entire Road Ring- I hear you should dedicate at least 3 days to complete the entire Ring Road so I would definitely recommend getting your own car for that long of a trip.

Did you really go to Iceland if you didn’t stop by the Blue Lagoon? I think not! I read a fun fact that 500,000 people visit Iceland a year and 400,000 of those visitors stop by the Blue Lagoon on their trip. It’s definitely a MUST SEE while in Iceland. Also, let’s be real…who can’t use a nice soak in a mineral infused pool with natural healing and relaxing properties? I thought so! 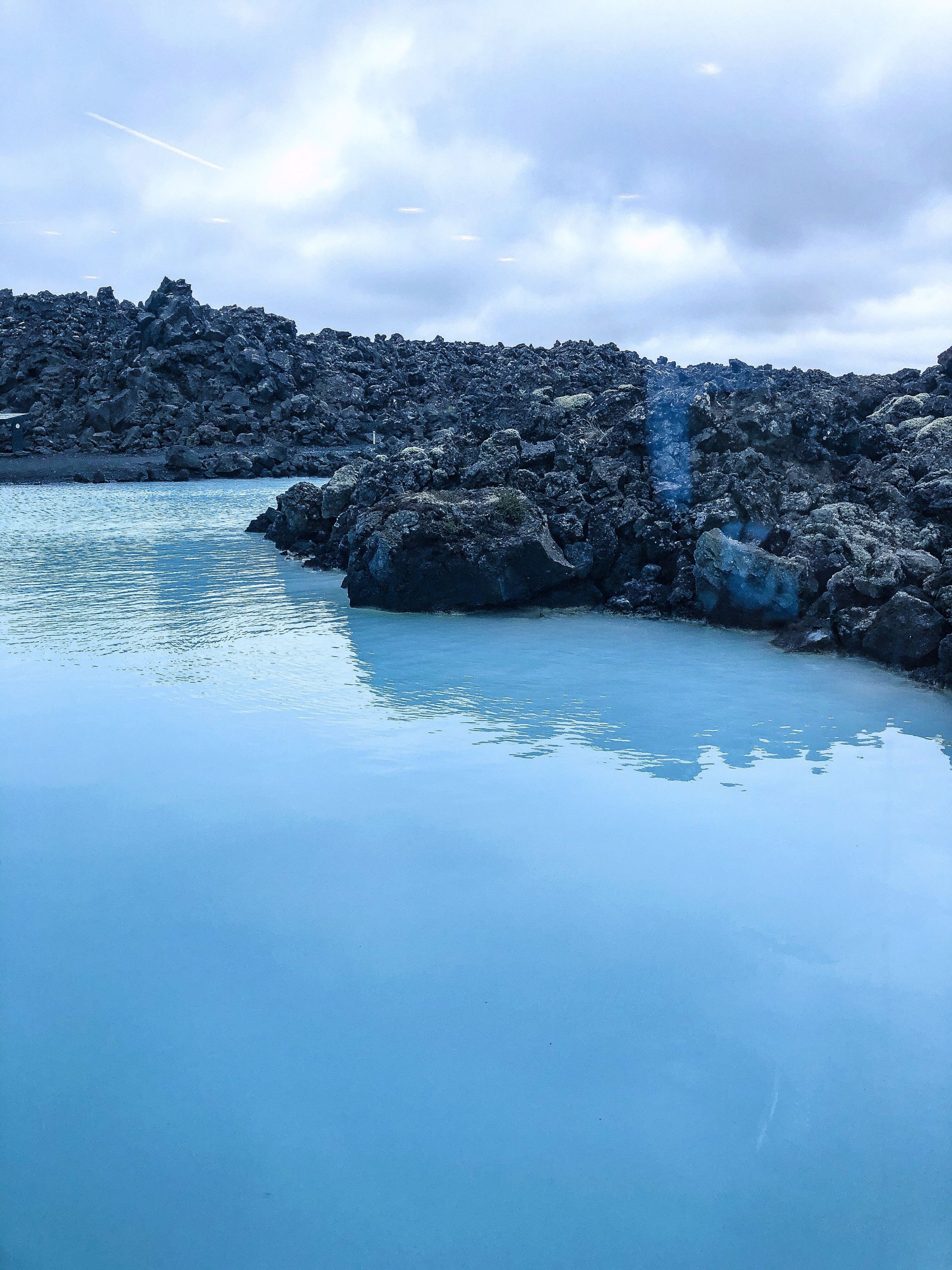 I recommend you either go to the Blue Lagoon at the beginning of your trip or at the end. It’s closer to the airport then it is from Reykjavik and you’ll save about 20-30 mins each way. People frequently wonder how long is a good enough time to spend there. Well I was there for about 5-6 hours including an hour or so for our lunch at the Lava Cafe, also very RECOMMENDED!

…the big city in Iceland and definitely worth carving a couple hours out of your travel to stop by and check out the downtown stores. Iceland has its roots in Viking history so there’s a ton of stores with Viking folklore, souvenirs, and artifacts. There a couple of quirky little stores and museums in Iceland including the penis museum! I hear you need to check out the penis museum if you get a chance!

Travel Tip: Wear a parka and bring an umbrella at all times! One second it’ll be a sunny day and next it’ll be partly cloudy turned hail and border-line snow! Just be prepared! 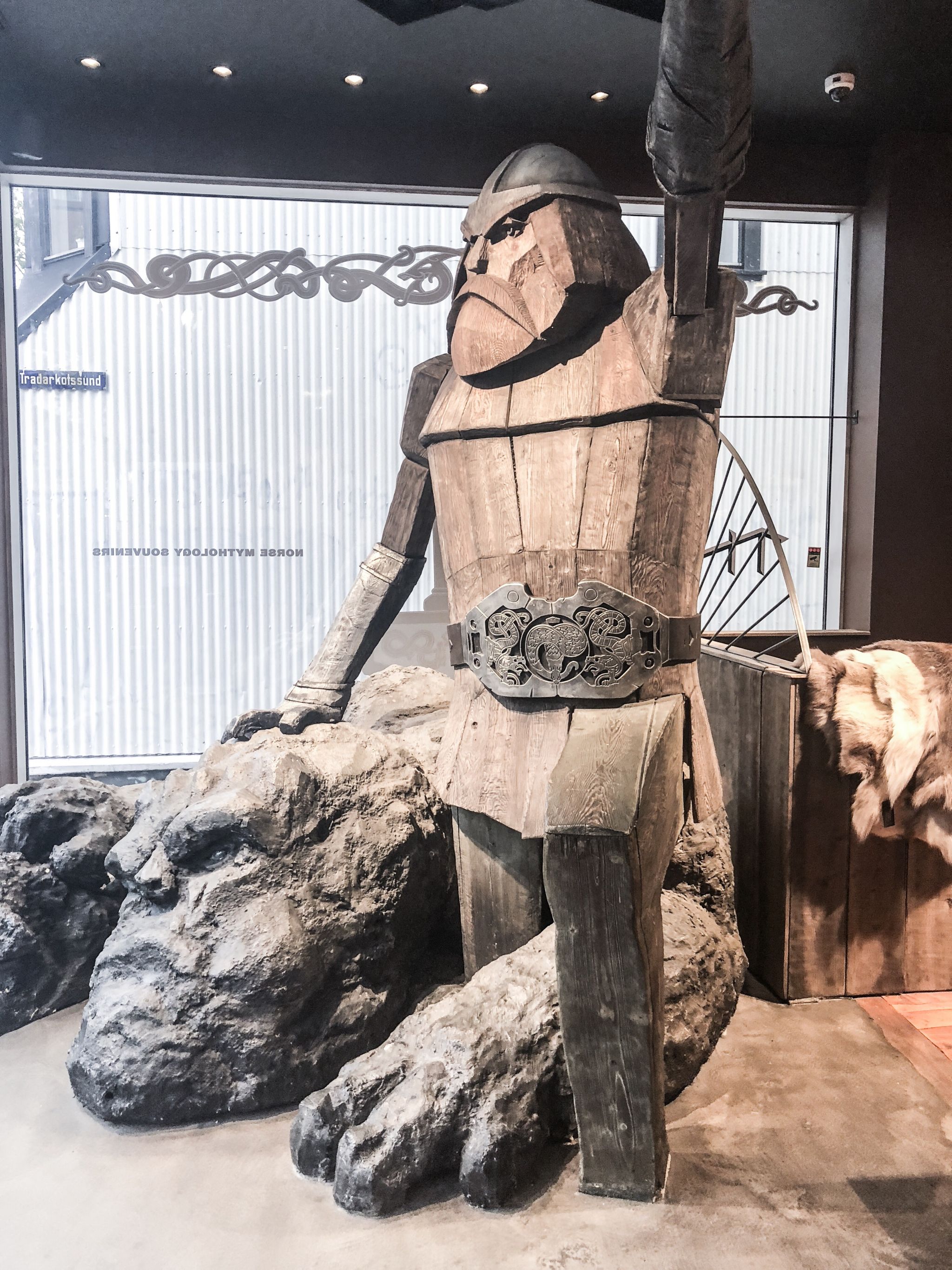 There aren’t too many sites in Reykjavik but one sure site I recommend you check out would be Hallgrímskirkja. It’s a Lutheran Church and the architecture looks quite cool and as a bonus there’s a statue of Leif Erikson, the founder of Iceland. There’s a plaque with some historical information of Leif’s contribution to Iceland. Also, it’s located right across the street from downtown Reykjavik so you rather as well stop by at some point. 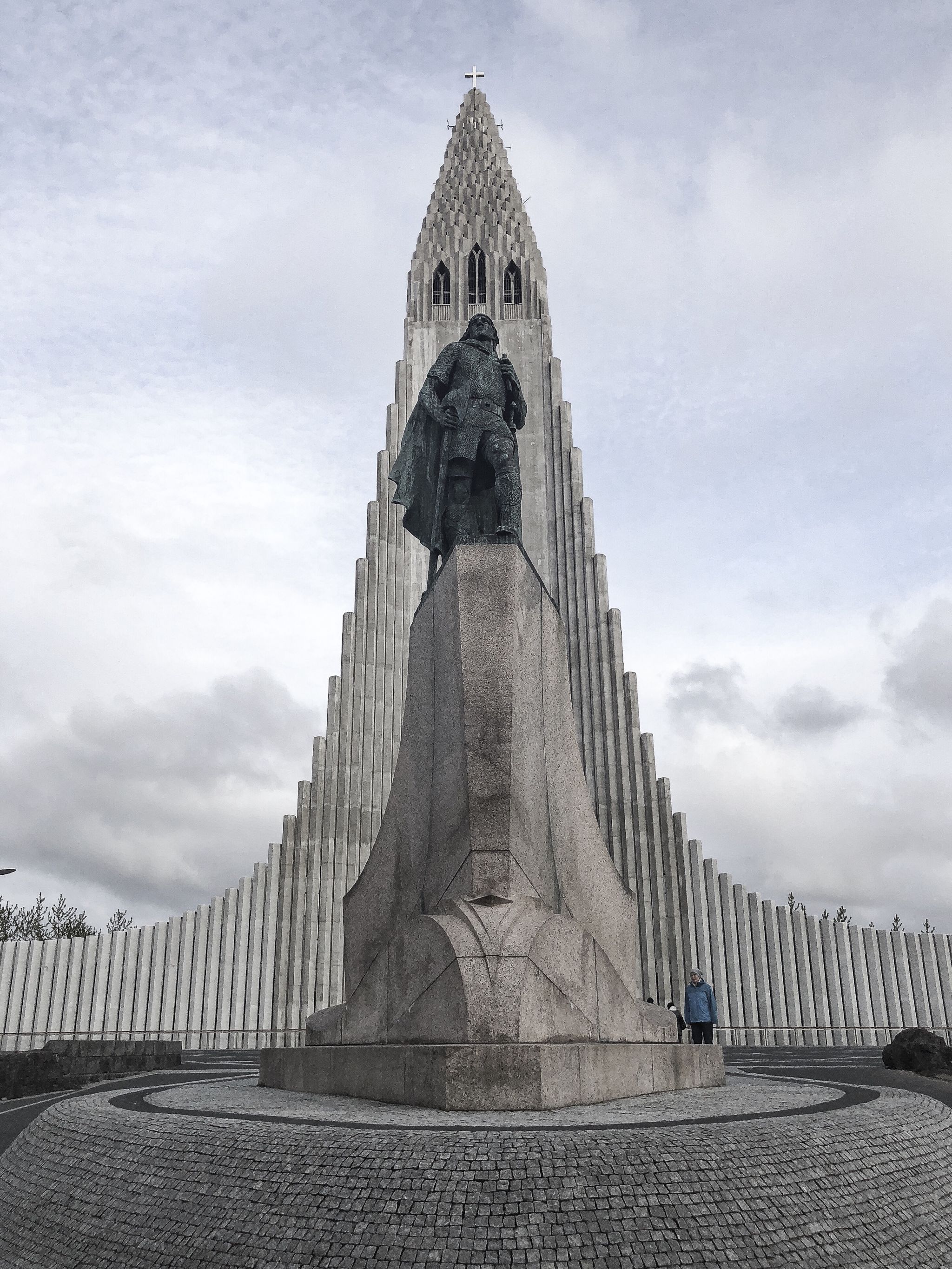 Hmmm so if you’re in Iceland long enough to do both, then why not do both tours! Golden Circle is the more popular route from what I understand but a lot of people told me to opt for the south coast instead. If you’re stuck like I was check out some blogs and reviews of both and decide which route has more of your scenery and activities.

I used the map from the blog of Justin Plus Lauren from my smartphone because they added a google map to their site which really helped when we were on the road. Thanks Justin and Lauren!

Stops Along the South Coast

I read a couple of blogs on the south coast tour and really liked that it included several waterfalls and really wanted to stop by the town of Vik. Second to the Blue Lagoon, this was my favorite part of Iceland. I really enjoyed the drive along the south coast….I don’t think I’ve ever seen or will see scenery like I saw in Iceland. When I say there were dozens of waterfalls just spewing out of the mountain/cliff sides, I mean they were never ending! It was an amazing site to see. 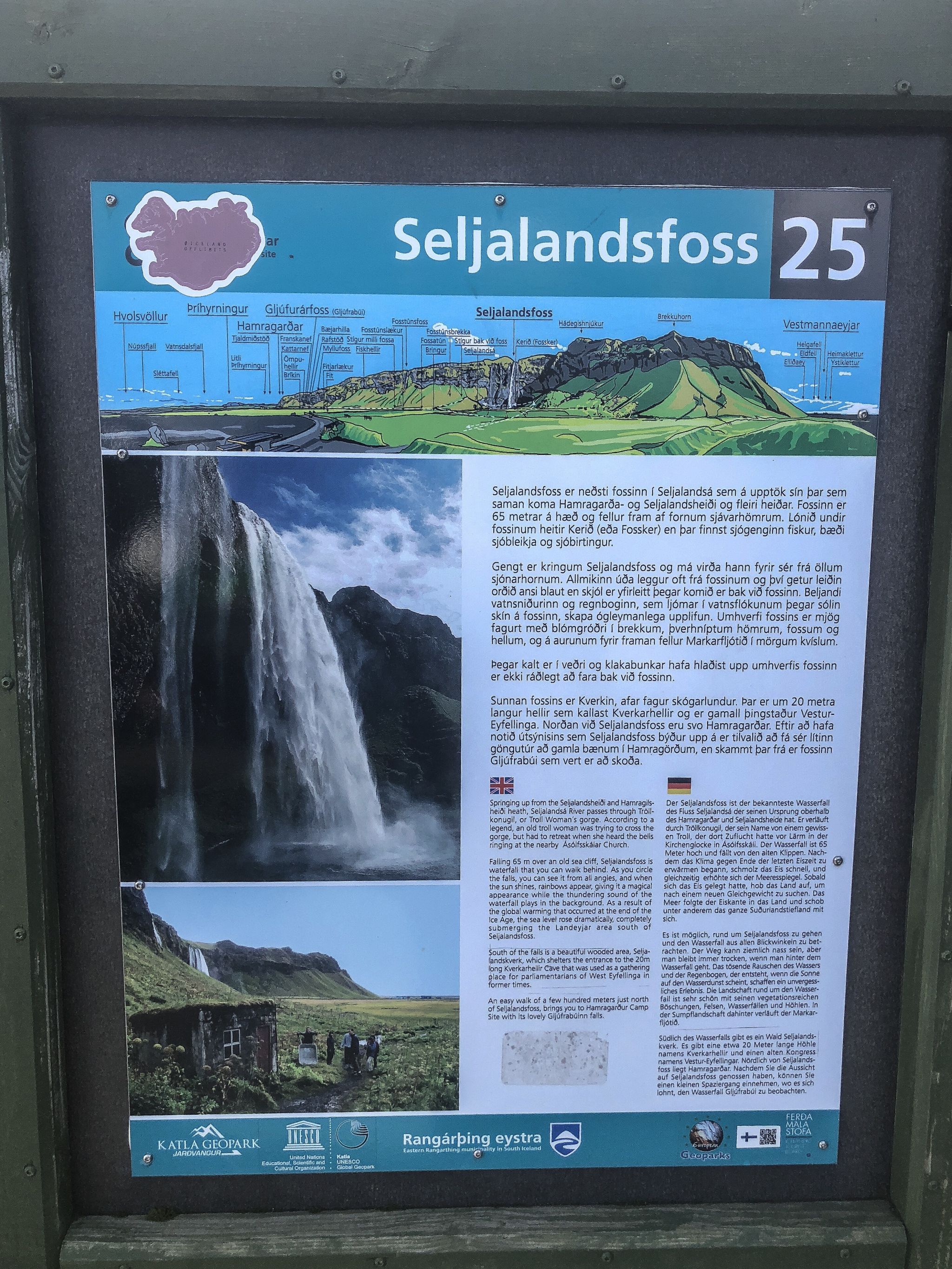 The first stop along our south coast tour was of course a waterfall! Seljalandsfoss! You can see this one as you’re coming up the highway, it’s definitely hard to miss! The waterfalls are so pure in Iceland, I brought my bottle up so I could get some fresh water….and let me tell you, it was sooooo fresh! You’re just surrounded by lush green hills, ancient cliff sides, and gushing waterfalls. 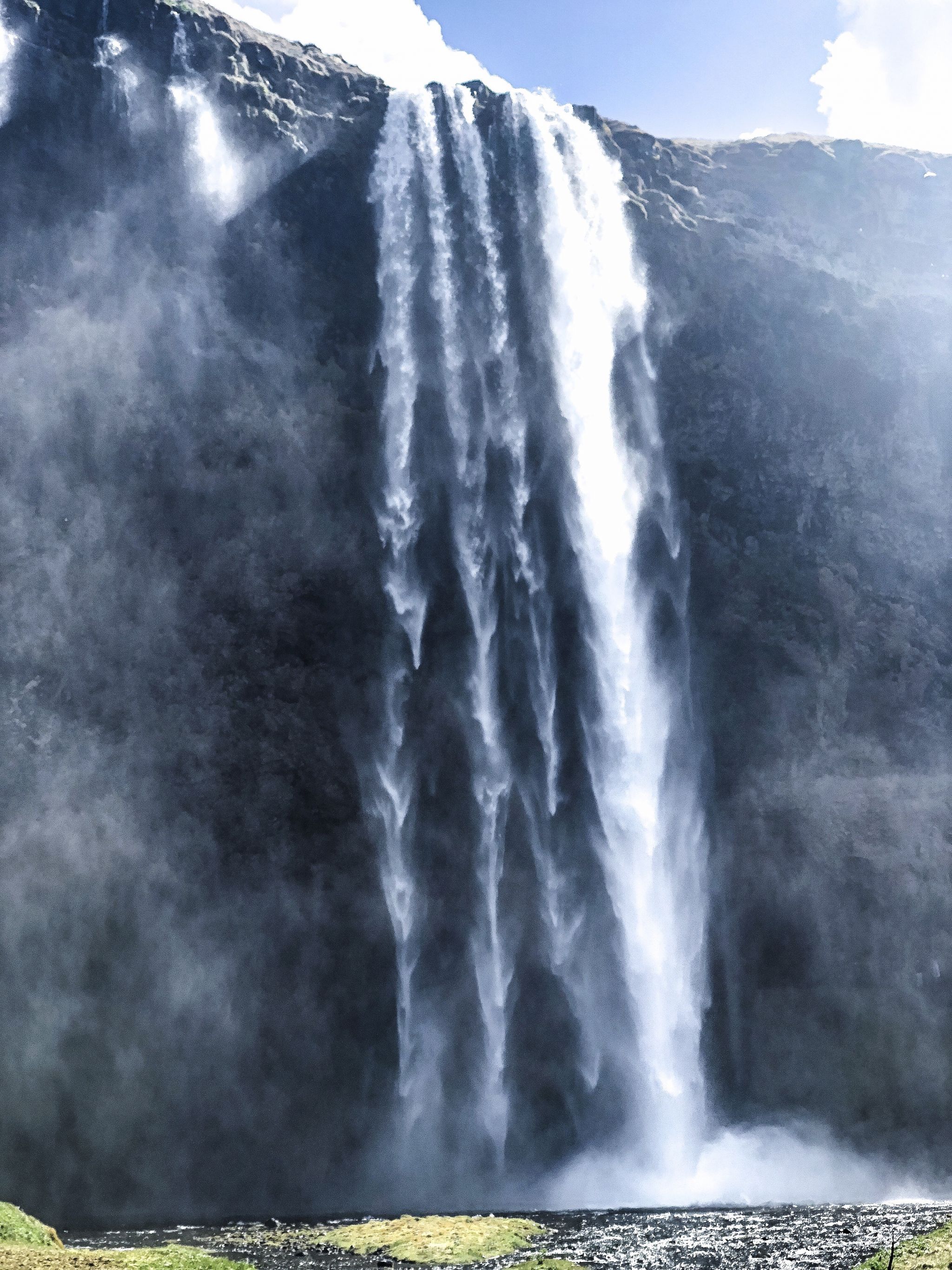 Take a nice walk around and check out the waterfall from different angles, they’ve got some stairs so you can get closer and get some great shots. The cool part about this stop is that there is actually a secondary waterfall just a quarter mile or so away. Gljufrabui, is really unique because there’s a short (but extremely wet) path that leads you to the base of the waterfall which is in a canyon-type environment! It was extremely cold and I got SOAKED but it was pretty worth it for the experience, plus I got to bottle right at the source 😉 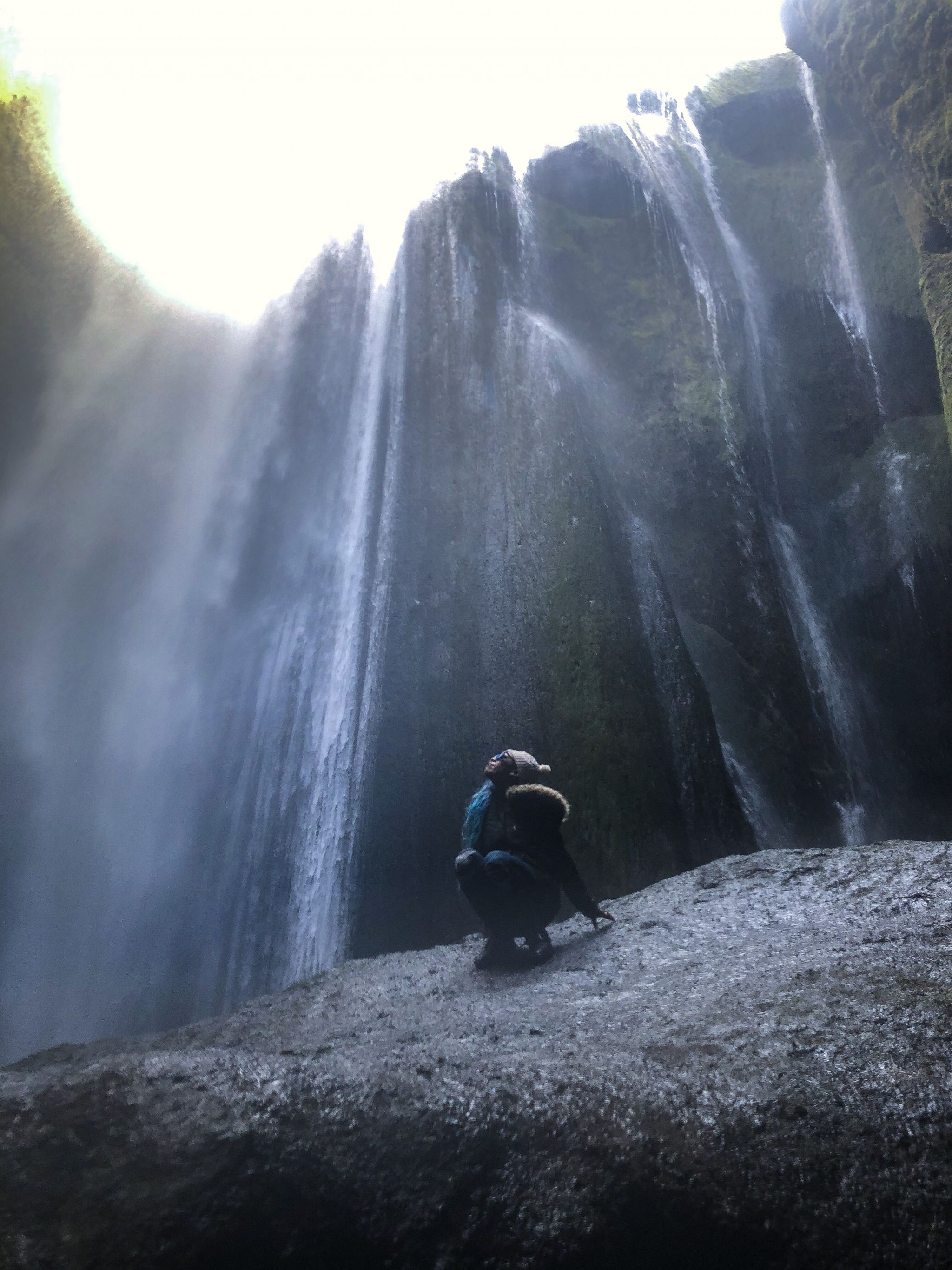 Travel Tip:  The short but extremely wet path to get to Gljufrabui waterfalls can be seen below…it was pretty chilly and windy when we were there in mid-May so I would recommend getting the Icelandic Lamb Soup to warm back up after exploring the waterfalls. 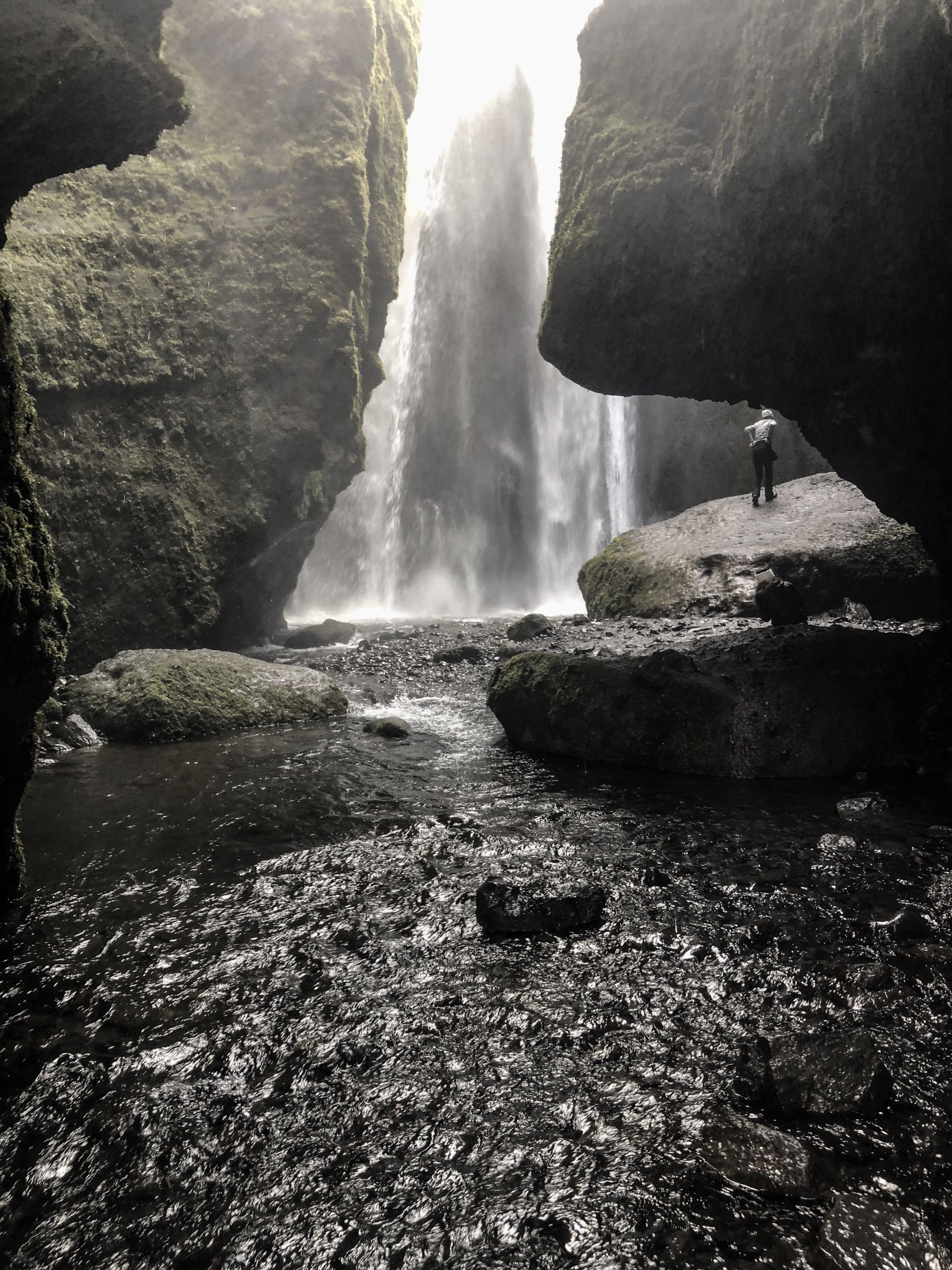 Travel Tip: There’s also bathrooms at this stop so if there are any full bladders it’s a great time to stop for potty break.

…did I mention lamb soup? 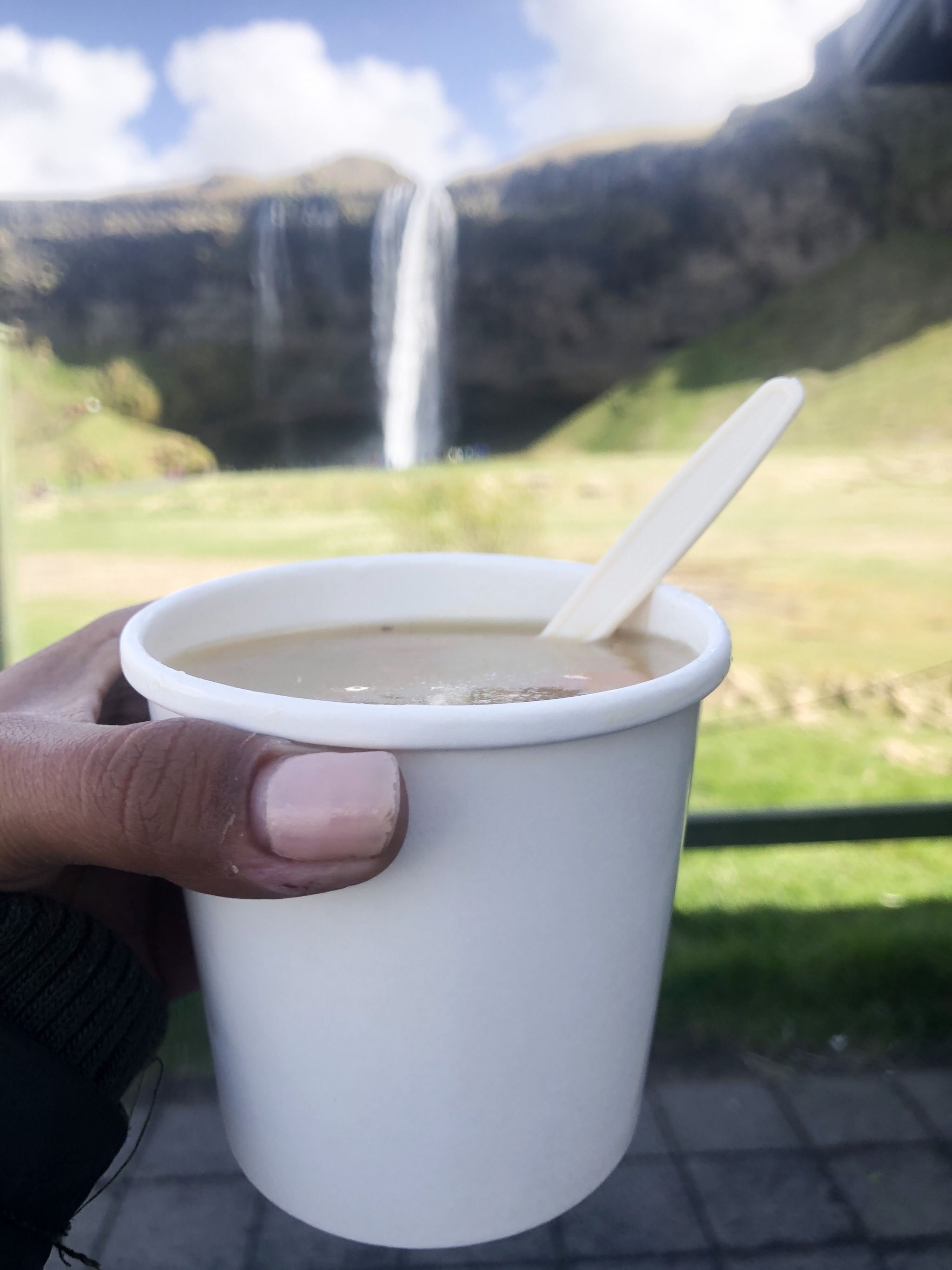 As you drive along the south coast check out the cliff sides and you’ll notice there are tons of waterfalls spewing out the sides of them! I probably saw about 50 or so waterfalls all in all but most if not all were on private property so I didn’t go check it out.

Anyways, shortly after Seljalandsfoss and Gljufrabui you’ll get to another spectacular waterfall, Skogafoss. This one also come with a set of stairs, if you dare, that go pretty far up to give you a more eagle eye view of the waterfall. 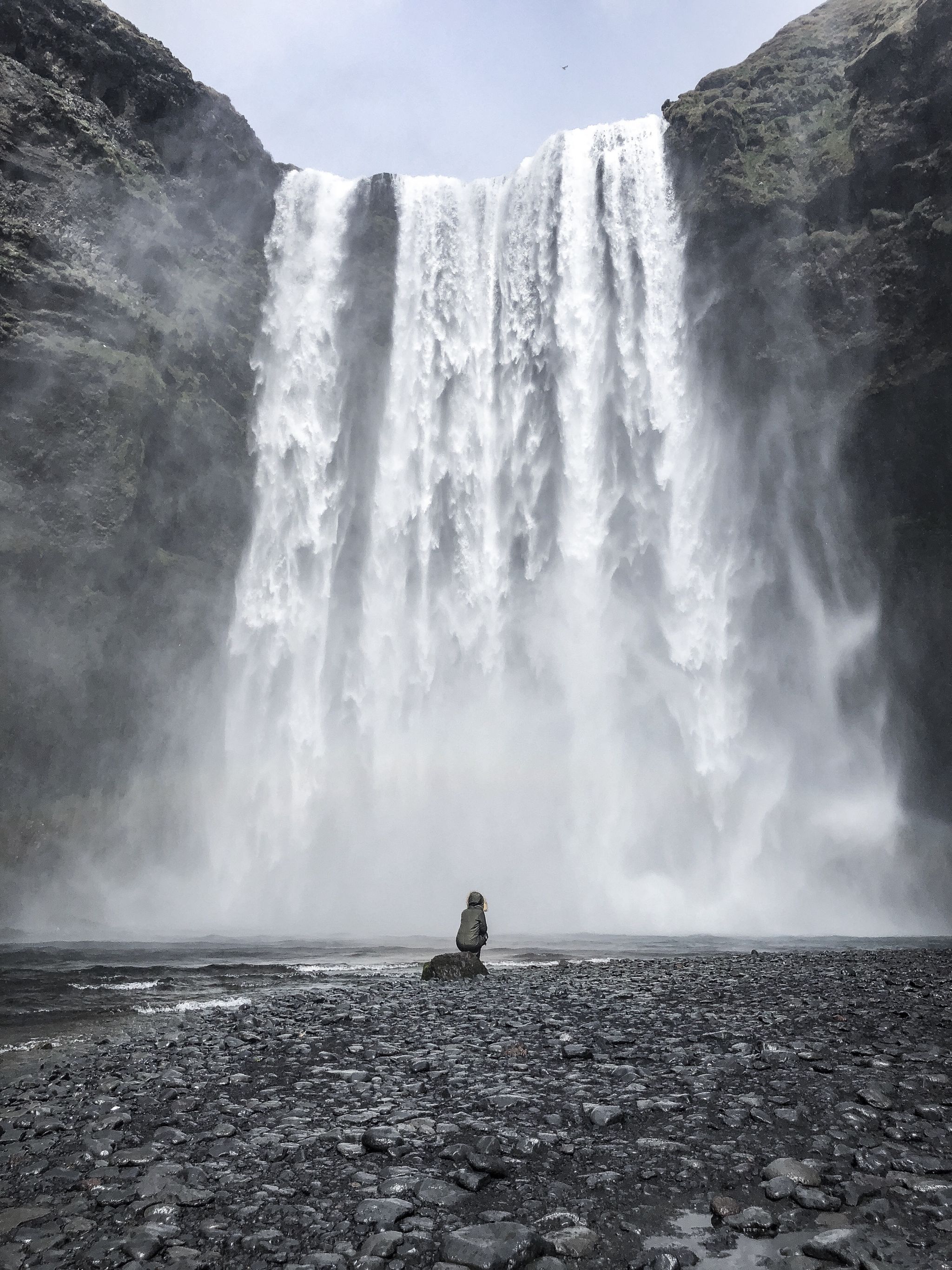 From Skogafoss you can either go to Vik or to the Black Sand Beach. Technically there is a black sand beach in Vik, if you’re low on time and want to make a quick stop. However, I would recommend checking out the Kirkjufjara Beach. The beach is bigger and the views are better in my opinion. You can also hike around in the nearby hillside for possibly better views. Plus there is a delicious restaurant there!

One of the last stops along your south coast tour is Vik. If you choose to continue, you rather as well opt for the entire Ring Road. I actually was slightly disappointed in Vik, I had expected there to be more development, history, and restaurants….and there were NOT. However, since you’re already there, you rather as well roll by and grab coffee, lamb soup, and go potty. Also, if you don’t have enough time to go to Kirkjufjara Beach then you can check the local one out at Vik! 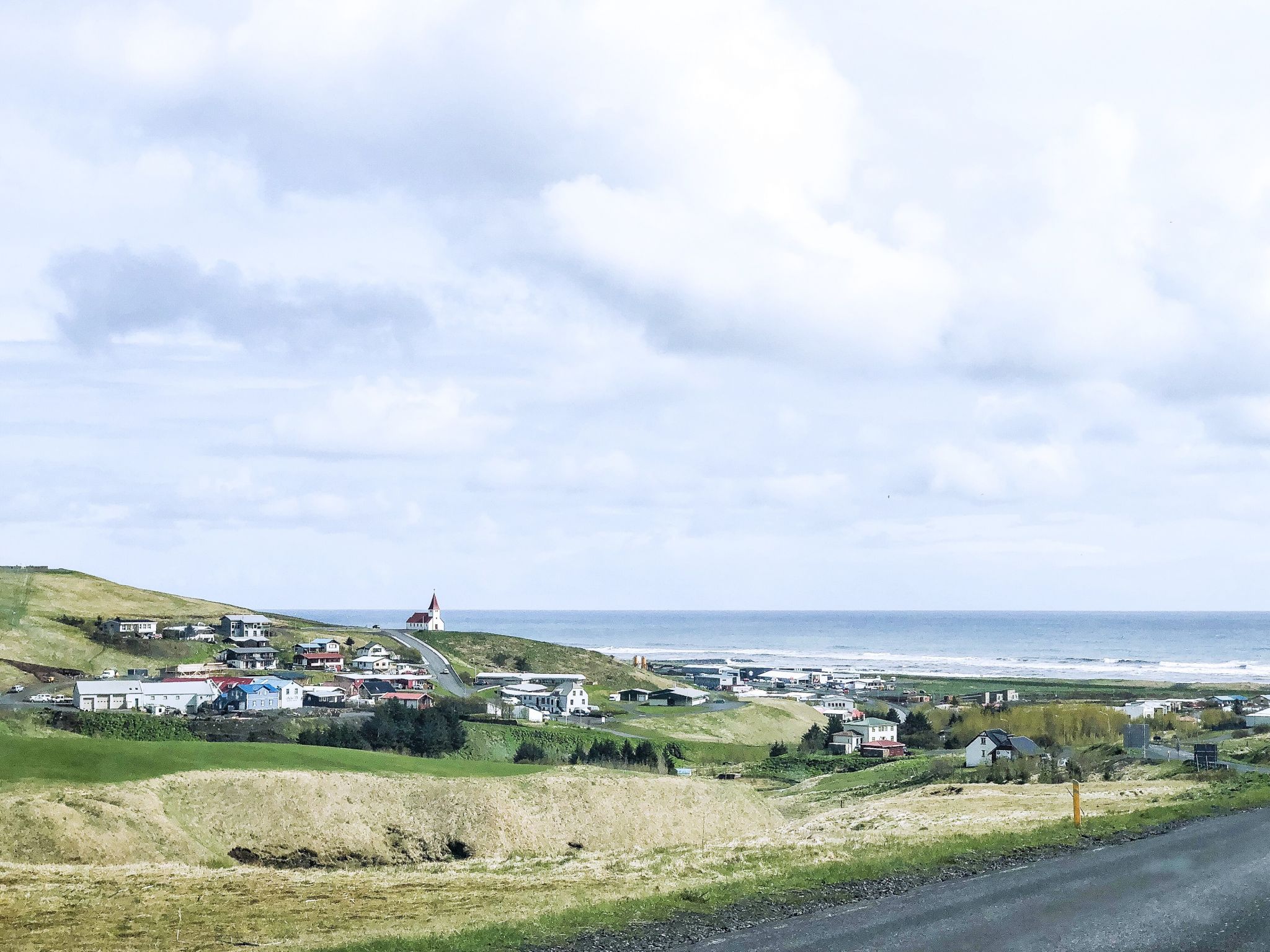 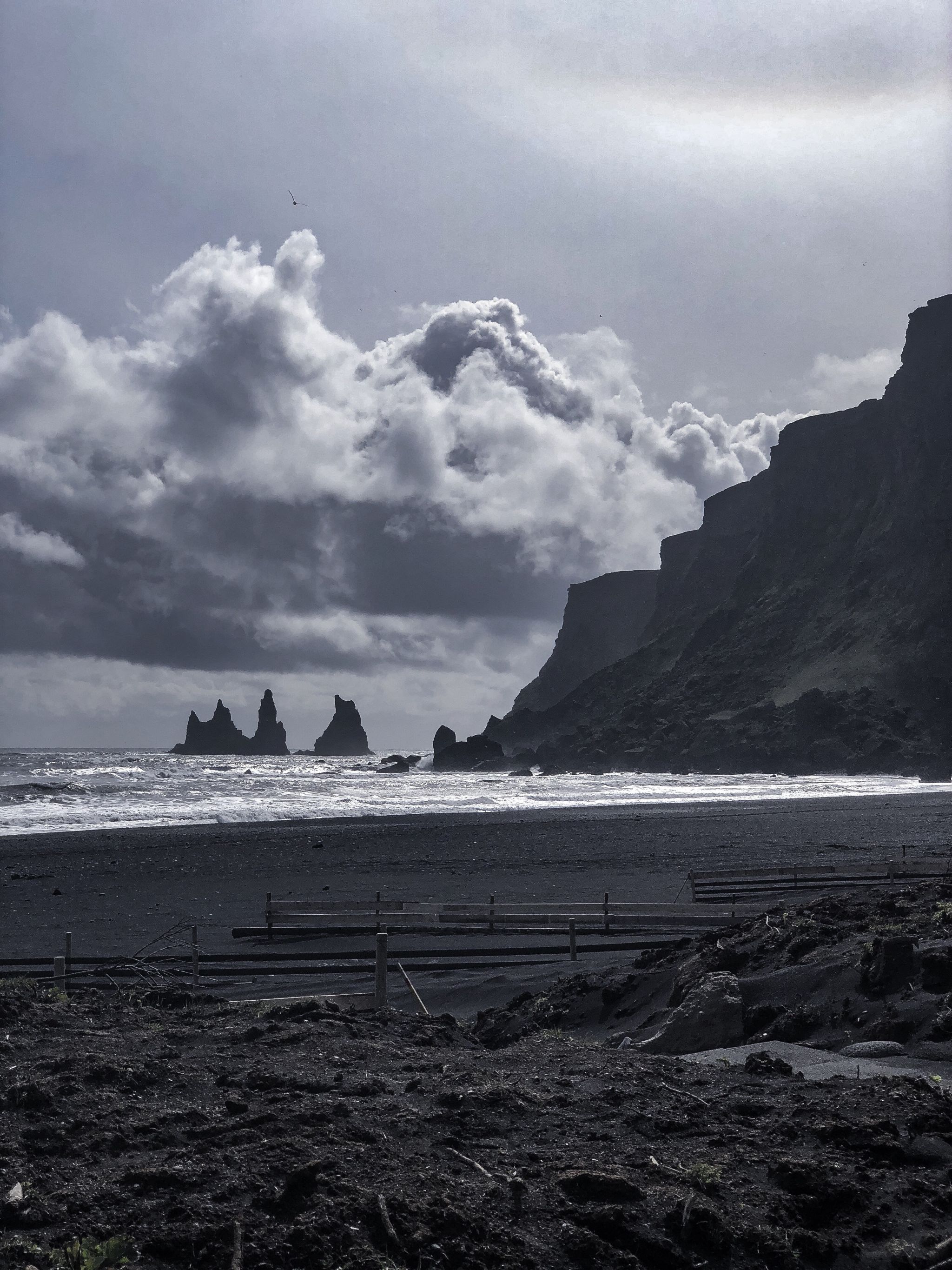 One of the main reasons I chose the south coast tour was because I really wanted to see a black sand beach! I have heard of them and had seen so many cool pictures and wanted to marvel at its beauty myself. Bonus, the ones in Iceland are surrounded by unique basalt formations which are a breathtaking view against the sun. 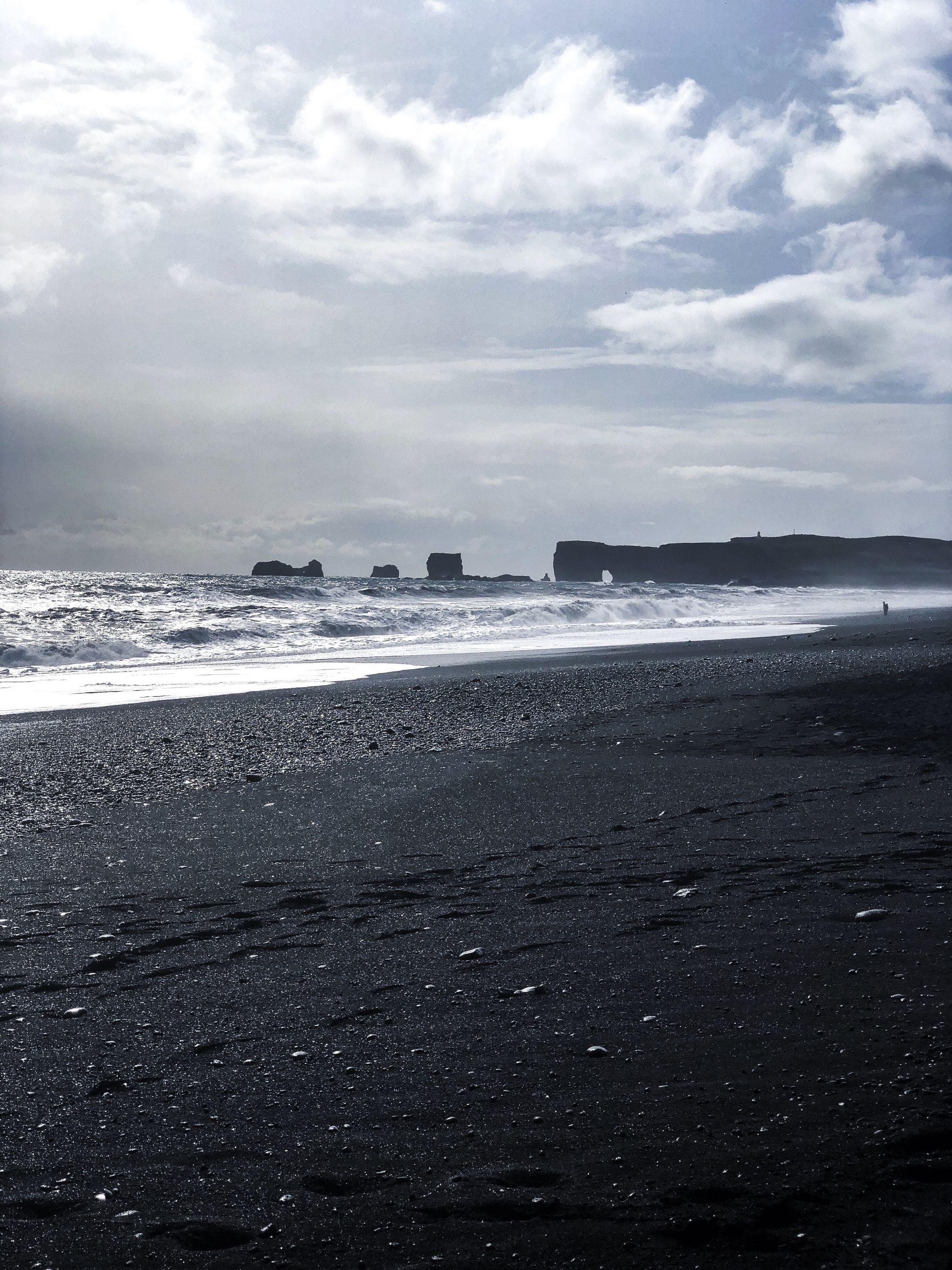 I had the cod fillet mixed with potatoes and herbs with some Icelandic spices and seasonings…DELISH!

If you’ve ever dreamed of walking across a glacier, on top of an active volcano, then Iceland is the perfect destination for you…also, you’re a bit more adventurous than I could ever be! ** CLAP CLAP**. There are several glaciers located throughout the island of Iceland and the 4th larges one is located along the south coast. There is a walking path that takes you up to the glacier but if you plan on going for a “glacier walk”, I recommend you do it with a professional guide. There are plenty in Iceland and even a glacier walk tour at the glacier…options are endless but be safe! 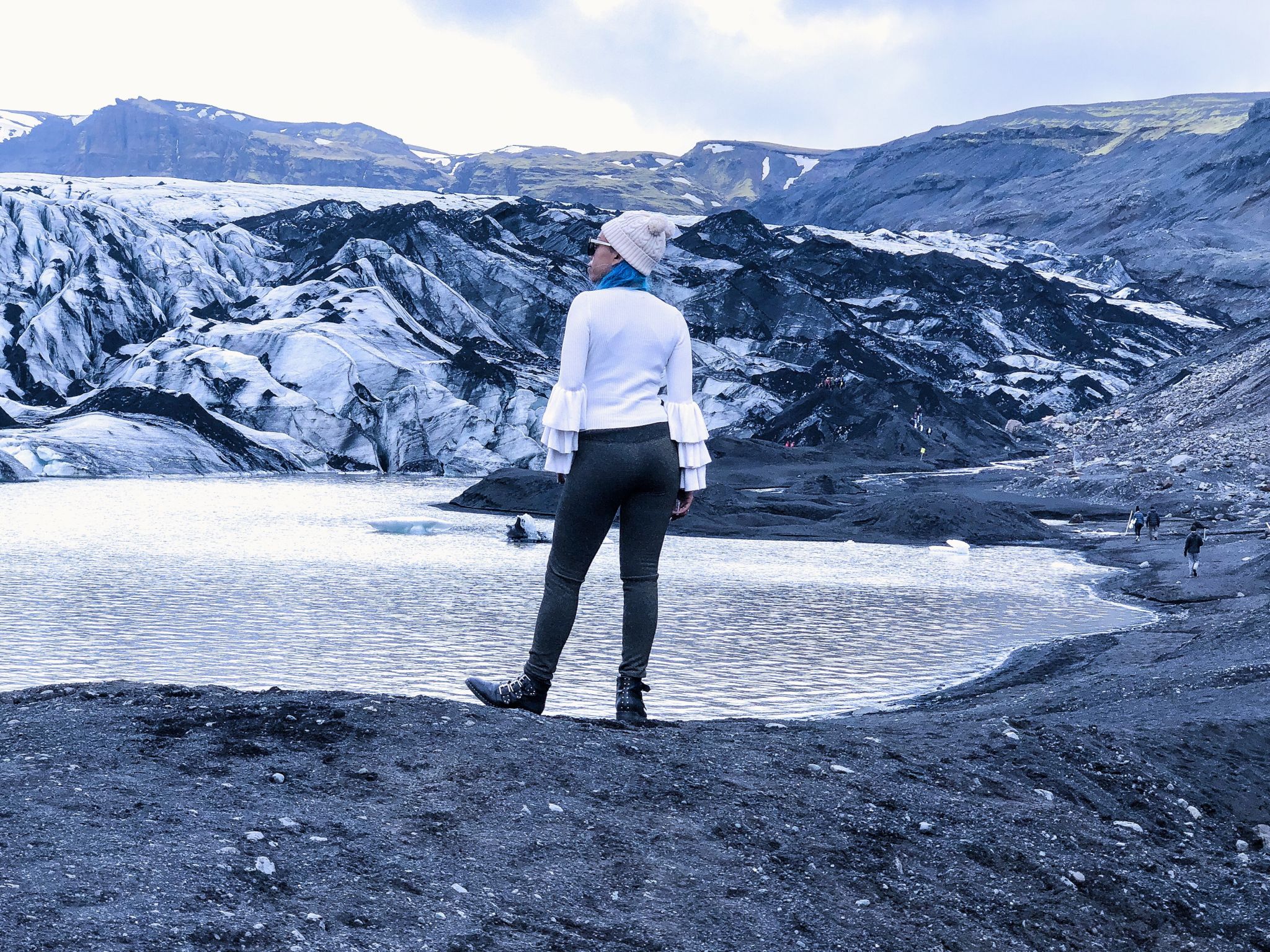 Thank you Iceland…you are officially my 10th country on my list to see the world. You tested me to leap into adventures that this California girl would not typically do and taught me that I could withstand some of the coldest environments, EVER! Thanks for the memories <3 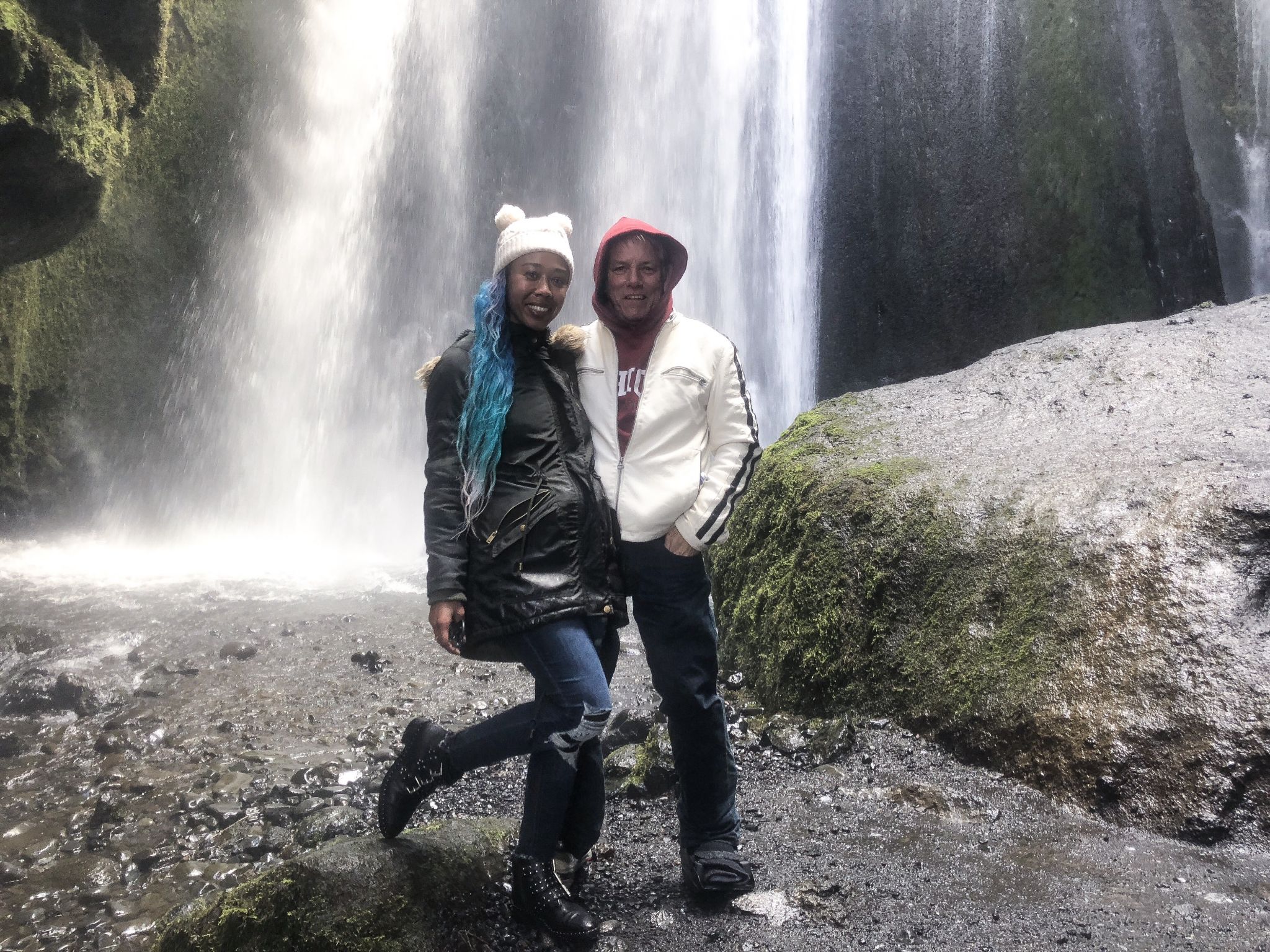