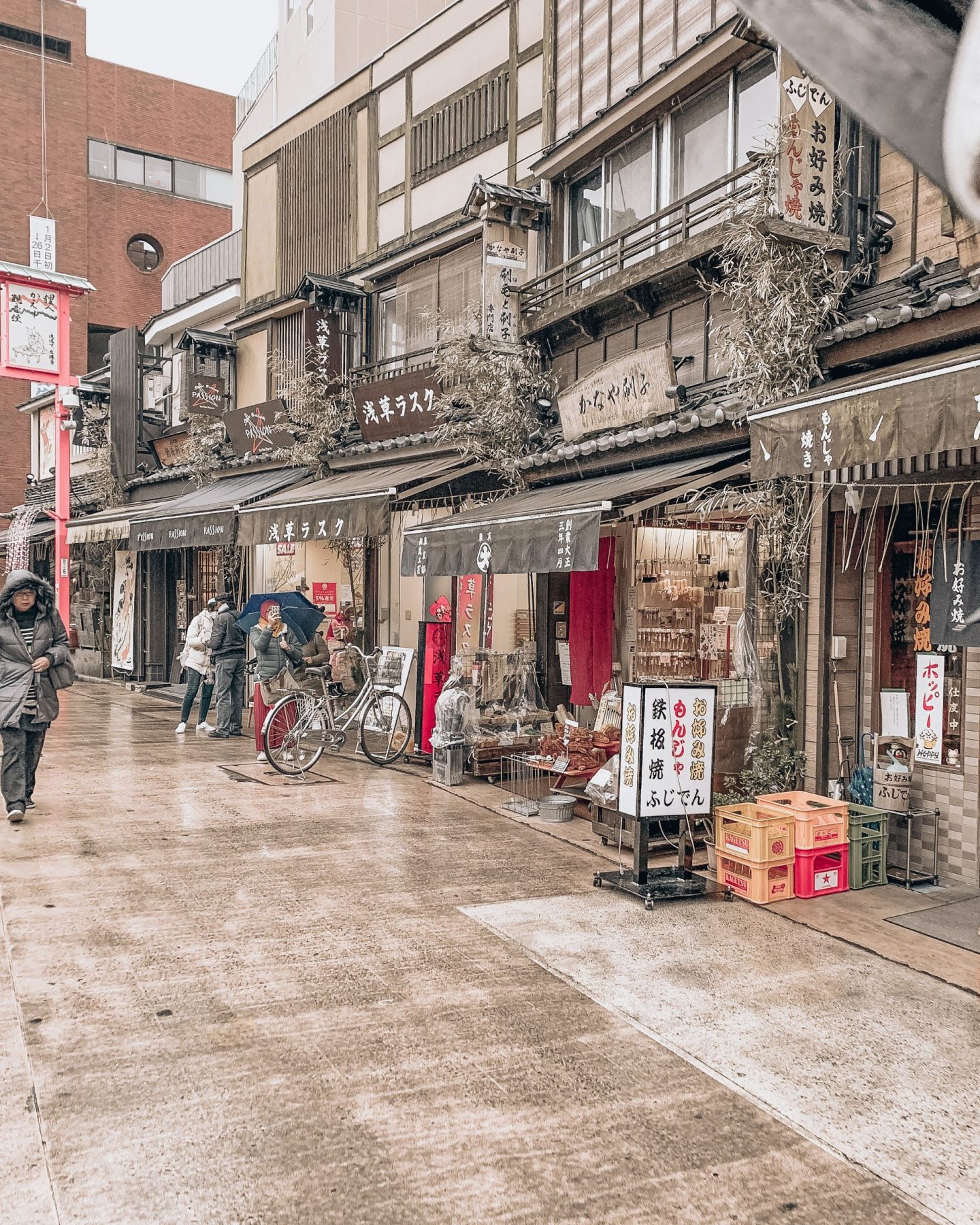 Hope you enjoyed my blog posts on my Mexico Travels to Puerto Vallarta and Sayulita! I’m now going to go across the Pacific Ocean to my motherland of Japan! I’ve done a few blog posts on Japan 72 Hours in Tokyo and 3 Days in Kyoto but this time I thought I’d share some ideas of great day trips in and near Tokyo where you can find some Old Japan vibes!

if you’re looking for a district within Tokyo then look no further than Asakusa, Kagurazaka, and Yanaka….if you only have time for one then I would recommend going to Asakusa because it’s the largest area and has the most to offer if you’re short on time. However, I recommend visiting all of these districts as they all have their own unique qualities!

Most famously known for Sensoji Temple (I’m sure you’ve seen a pic on IG of Kaminarimon or “Thunder Gate”) is a great starting point to travel back in time from Tokyo to Edo (original name for Tokyo). On our last trip to Tokyo we actually stayed in Asakusa and stayed at a Ryokan or traditional Japanese Guest House with onsen onsite and instead of beds you sleep on the futon (pictured below). However if you don’t have time to stay overnight in Asakusa, no worries. You can get the full experience in one full day!

Arrive early and start the morning off with a traditional Japanese breakfast at a nearby Ryokan or restaurant. Make your way to Sensoji Temple and head straight to the main entrance known as Kaminarimon or Thunder Gate. You can either take the alleys aligned with souvenirs and snack booths or take the side street and explore the grounds before the crowds arrive and shop after (this decision is based on what your preference/priorities are less crowded temple or less crowded shopping?). You can spend hours on the ground at Sensoji and I recommend either doing a walking tour or rent a rickshaw (photo below) and they’ll give you some of the historical insight in the area.

Last but not least, walk about 10-15 minutes or have your rickshaw driver take you to Orange Street and surrounding area. Asakusa is one of the oldest neighborhoods in Tokyo and majority of the development was not on the Temple/Shrine grounds but just outside. Head over to Orange Street and check out some of the original structures and businesses that have been around for 5+ generations….the featured image on this blog post is from that area…

The next few places I’ll mention are just outside of Tokyo and make great day trip ideas, especially if you have enough time for a day trip but not enough time for Kyoto (a problem that happens more often than not)….

Located in Saitama, about an hour outside of Central Tokyo is the cute little town of Kawagoe. It has been selected by Japanese Historic Society (or their equivalent) to maintain its original architectural style(s). As you walk down the main road or Kura no Machi you’ll notice unfinished wood lined shops along the sides of the streets, taking you back to the time when Tokyo was still referred to as Edo. Weaved baskets perfectly placed outside each store showcasing the most popular and trendy items of the day. Did you really go to Kawagoe if you don’t return with a handful of traditional Japanese candies and rice crackers?!?!

There are a few historic buildings and sites worth checking out during your day trip to Kawagoe. Toki-no-Kane is a wooden bell tower dating as far back as the late 1800’s and located in the mix of the main historic district. Not much to see but if you’re into architecture and building, like me, then old structures are always worth checking out! Something a bit different you can find in Kawagoe is a castle! About a 10-15 min walk from the main district is Honmaru Goten…what used to be a house for the Shogunate who ruled the area at the time. Its definitely worth checking out!

***There are a few shrines and temples in Kawagoe. Buuuuut if you have time to explore other parts of Tokyo then I would skip out on this as to not get Temple burn-out…it definitely can happen

Hungry? Kawagoe is known for unagi or eel. So if you’re up for it I definitely recommend stopping by a restaurant or even one of the stands as a snack or lunch! Don’t forget to go down Kashiya Yokocho or Penny Candy Alley to get some Japanese candy and sweets!

as a lover of urban planning, I naturally gravitate towards anything architecture, building, and mapping…cue in image of Sawara the cute town that has it all! The first man to survey and map out Japan married into the Inoh family, who had lived in Sawara for genrations. Naturally there is a lot of context around maps in general in Sawara but the Inoh Tadakata Museum is a must see during your day trip to Sawara! He walked the entire country of Japan to complete his mapping project and his maps were used as the foundation of Japan’s current map..uh-may-zing!

The cute town of Sawara seems like it hasn’t changed much since its founding in the 1600’s. Maybe its the river/canal system that still operates today where small wooden fishing boats (tours to be honest) can still be found floating and operating…even the streets of Sawara are lined with the merchants’ houses, old warehouses, and historic buildings…just stop atop one of the concrete bridges and take in all the sights, smells, and vibes giving you a glimpse of historical Japan.

Just on the outskirts of the main historic district is a gorgeous botanical garden filled with hundreds of irises and wisterias. If your lucky enough to visit during blooming season then definitely make sure to check it out. Sawara also has three matsuri or festivals worth checking out if your trip is the same time.

Still have some time in your day? Well if you want to take a step back in time, and I mean nearly 1500 years back in time then take the four minute train ride to Katori Station (on either the Kashima or Narita line, accompanied by a 25-minute walk), and stop by Katori Jingu. It is said to have been founded in BC 643 and enshrines Futsunushi no Kami, a deity who is believed to have helped found Japan. A bit off the beaten path but may be worth checking out.

I have a special place in my heart for Kamakura for several reasons…if you don’t care then scroll to the next paragraph lol. I was born in Kanagawa Prefecture which is where Kamakura is located so I have even more motherland feels when I go back. Also, my grandma’s side of the family has had ties in Kamakura for over 1000 years and one of main shrines in Kamakura is named after the family that founded the area over 1000 thousand years ago, which is also my grandma’s maiden name. So I’ve had a personal connection to Kamakura for generations, so excuse my biased 😉 my younger cousin actually just moved to Kamakura about a year ago so looks like we’ll be setting more roots there! 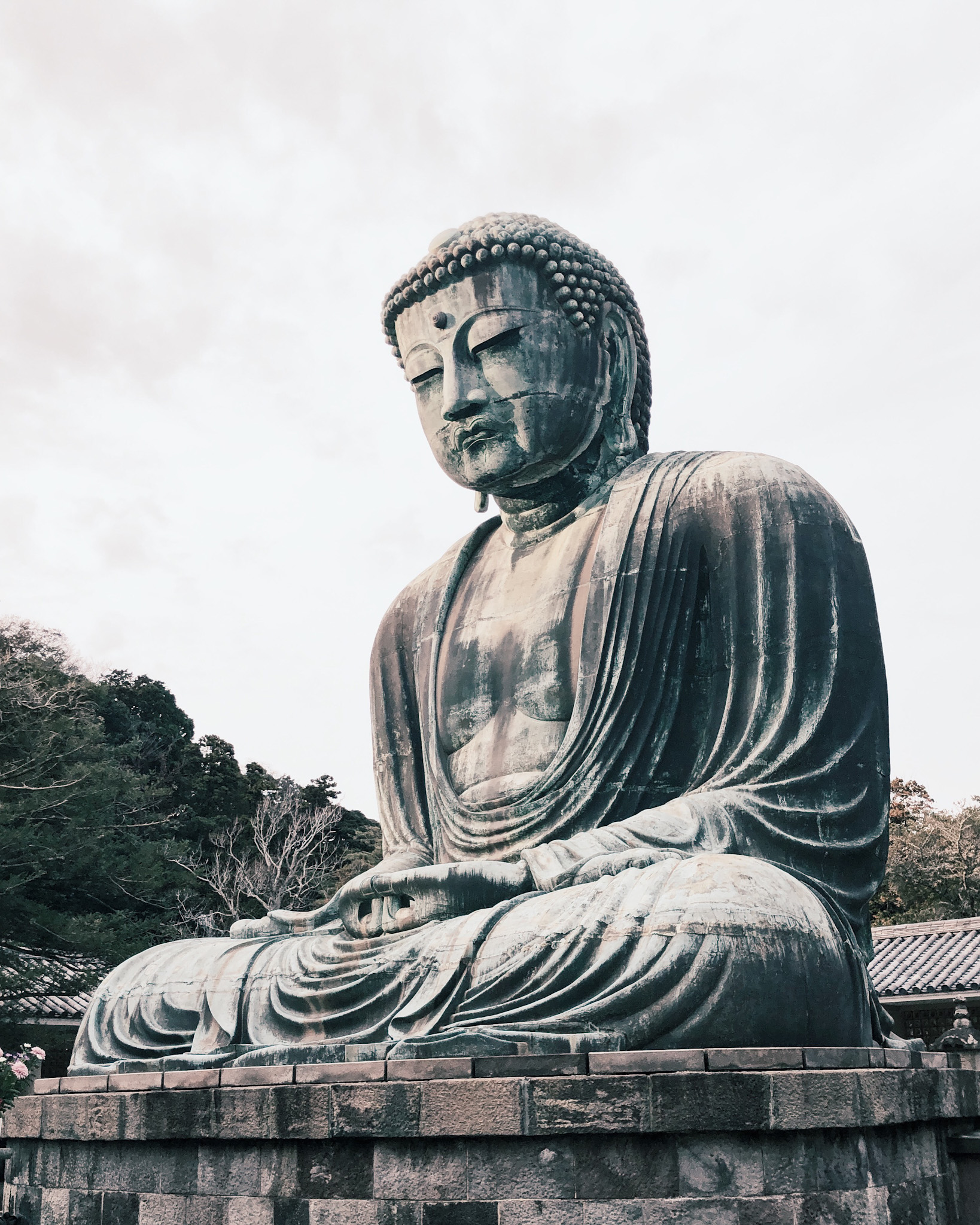 Its most recognizable landmark is the Kotoku-in Temple’s Great Buddha, a roughly 13m-high bronze statue. Buuttt you don’t want to come here without stopping by Hokoku-ji Temple inside of the Bamboo Garden. You want to make sure to stop in and explore the Bamboo Forest and then enjoy a nice cup of fresh hot green tea under the bamboo trees. Especially if you are not going to Kyoto during your trip then I definitely recommend stopping by on your Kamakura day trip. It is a bit off the main area(s) of Kamakura but you can easily get there via taxi or bus!